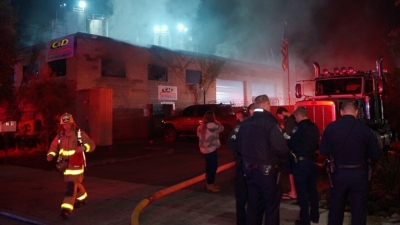 Update December 17, 2021:  Burton Kanehailue, who was in the New Mexico/Texas area, contacted El Cajon Police Department arson investigators, indicating he wanted to turn himself in to police. Kanehailue was subsequently taken into custody by the Socorro Police Department in New Mexico without incident. The tow truck stolen by Kanehailue was also recovered. Kanehailue is being held in New Mexico pending extradition to California, where he will face charges of arson and auto theft, says Lt. Randy Soulard with El Cajon Police.

The suspect weighs about 320 pounds, is 5 feet 9 inches tall, and has brown hair and brown eyes.

Last night at 11 p.m., Kanehailua reportedly entered his employer’s business after hours, carrying a gas can. “An employee was able to flee the building before the suspect poured what appeared to be gasoline inside an office and set the building on fire. The suspect then fled the scene in a flatbed C & D tow-truck, which he stole from the tow yard,” says Lieutenant Randy Soulard with El Cajon Police.

No one was in the building and no injuries occurred, but the arson caused extensive damage to the building.