December 24, 2011 (North Pole) -- For the 56th year, the U.S. North American Aerospace Defense Command will be tracking the global flight of Santa Claus as he leaves the north pole and delivers presents around the world on Christmas Eve, December 24,  at www.noradsanta.com.
This year, NORAD has gone high-tech, adding aps to track Santa via Facebook, YouTube and Twitter.  Children can also telephone Santa and fine pre-holiday games to play at the site. 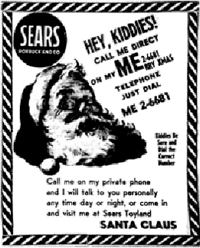 History and Overview: The program began on December 24, 1955 when a Sears’s department store placed an advertisement in a Colorado Springs newspaper which told children that they could telephone Santa Claus, and included a number for them to call. However, the telephone number printed was incorrect and calls instead came through to Colorado Springs' Continental Air Defense Command (CONAD) Center. Colonel Shoup, who was on duty that night, told his staff to give all children that called in…a "current location" for Santa Claus. The tradition began which continued when the North American Aerospace Defense Command (NORAD) replaced CONAD in 1958.
NORAD relies on volunteers to make the program possible. Each volunteer handles about forty telephone calls per hour, and the team typicallyhandles more than 12,000 e-mails and more than 70,000 telephone calls from more than two hundred countries and territories. Most of these contacts happen during the twenty-five hours from 2:00 a.m. on December 24 until 3:00 a.m. Mountain Time Zone on December 25.
Starting at  midnight Mountain Standard Time (11 p.m. Pacific Standard Time) on December 24, website visitors can watch Santa as he makes all the preparations for his flight. Then, at 3 a.m. PST, trackers worldwide can talk to a live phone operator to inquire about Santa’s whereabouts by dialing the toll-free number 1-877-Hi-NORAD (1-877-446-6723) or by sending an email to noradtrackssanta@gmail.com. NORAD’s “Santa Cams” will also stream videos as Santa makes his way over various locations worldwide. 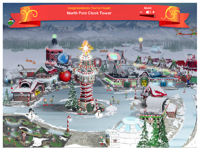 The NORAD Tracks Santa website went live December 1, and features a Countdown Calendar, a Kid’s Countdown Village with holiday games and activities that change daily and video messages from students and troops from around the world. The website is available in English, French, Spanish, German, Italian, Japanese, Brazilian Portuguese and Chinese.
For the first time, using free apps in the Apple iTunes Store and in the Android market, parents and children can use their smart phones to count down the days until Santa and his reindeer take off from the North Pole to deliver presents to kids everywhere.
Facebook, Google+, YouTube and Twitter also offer tracking opportunities. Santa followers can type “@noradsanta” into each search engine to get started. And that is not the only technology that goes into the Santa tracking mission. To track the big man in red, NORAD uses radar, satellites, Santa cams and fighter jets.
A NORAD radar system called the North Warning System consists of 47 installations strung across the northern border of North America. On 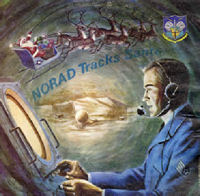 December 24, NORAD monitors the radar systems continuously for indications that Santa Claus has left the North Pole.
The moment radar indicates a lift-off; satellites positioned in geo-synchronous orbit at 22,300 miles from the Earth’s surface are equipped with infrared sensors, which enable them to detect heat. Rudolph’s bright red nose gives off an infrared signature that allows the satellites to detect Santa’s sleigh. NORAD starting using the Santa cam network in 1998. Santa cams, according to NORAD, are ultra-cool, high-tech, high-speed digital cameras prepositioned at many locations around the world. They use the cameras once a year to capture images and videos of Santa and his reindeer.
In the air, Canadian NORAD pilots flying the CF-18 fighter will intercept and welcome Santa to North America. In the United States, American NORAD fighter pilots in F-15s, F-16s or F-22 Raptors will fly alongside Santa’s airborne sleigh pulled by his famous reindeer: Dasher, Dancer, Prancer, Vixen, Comet, Cupid, Donner, Blitzen and Rudolph.
Once data is collected on December 24, it is pushed into Google Maps and Google Earth so families all over the world can follow Santa.
Thanks to these systems and technologies, starting at midnight Mountain Standard Time on December 24, visitors to the NORAD Santa website can watch Santa’s progress around the globe.
http://www.noradsanta.org/