December 19, 2019 (San Diego) - Traditions are important, especially at Christmas. Families need rituals, routines and things that bring them together; bonding and memories they can pass on. Perhaps The Traditions of Christmas show is already on your radar. If not, it’s a great family tradition or one-time outing, encompassing everything you would want to see in a Christmas production. The show is colorful, festive, fun, full of joy and infectious holiday spirit.

This year, Christian Community Theatre in partnership with Arts In Motion present "Traditions Of Christmas Remixed.”  The remixed features the old and the new, with directors Chris Rubio and Paul Russell, musical director Terry Hendericks, choreographer KC Grulli-Miller and show coordinator Summer Belous. I mention all of these because I know these people worked hard on this. Spectacular. 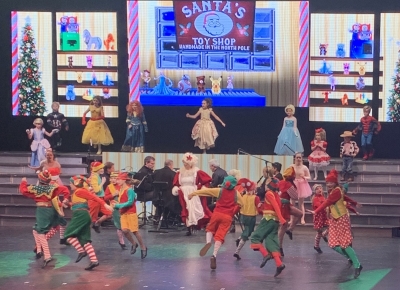 I know they have teams and the teams work hard but I can’t even imagine pulling off something of this magnitude. There is so much going on in every scene, in some cases almost too much; it’s hard to give focus to all aspects, some of which are extremely deserving of attention.  Getting all the elements of each scene coordinated and on and off the stage without missing a beat must be challenging.

The show starts in Act 1, Scene 1 with Celebrate Christmas. Scene 2 is Christmas Around The World featuring different ways each country celebrates. Then we have the Pageant of Santas. This was cool to see what each country calls Santa and the wonderful costumes they wear. In Scene 4, we have Christmas celebrations across the United States. Scene 5 is Santa's Workshop, which features Parade of the Wooden Soldiers performed by the Kickline. The girls were extraordinary--CYT's answers to the Rockettes. In Act 2, we have A Christmas Medley, Christmas at the Movies and the Nativity.

My overall favorite was The Drummer Boy featured in Christmas in Chicago. So many different drummers are spread around the stage going rat-to-tat.  Wonderful! The orchestra is located center stage and all the action surrounds them: singing, dancing and merriment. The stage is framed by this delightfully digitized light show. 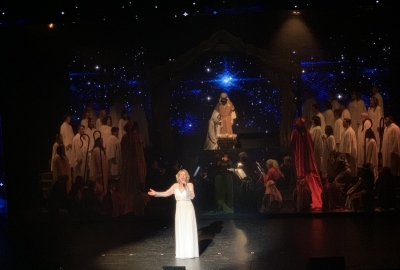 Let's talk Nativity. The Nativity ended the show and was literally perfect, incredibly beautiful. The lights on the stage dimmed, featuring a stable with Mary, Joseph and baby Jesus the Savior in the manger while voices sing "O Holy Night" and "Joy To The World" in a touching and fitting ending, reminding us of the reason for the season.

CYT  - located in all areas of San Diego