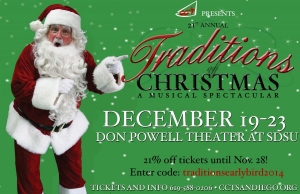 December 7, 2014 (San Diego)—Christian Community Theatre (CCT)’s annual production, Traditions of Christmas, will be returning to the stage after a one year hiatus. This year, the program will be held at the Don Powell Theater at SDSU, where the Christmas spectacular will run from December 19 - 23.

You’re invited to be a part of one of San Diego’s most beloved traditions as CCT celebrates 21 years of Christmas memories.  This year’s production will feature scenes such as Christmas San Diego Style,  A Salute to the Military, White Christmas, exciting swing dances, tap numbers from a fantastic Rockette style kickline and more.

CCT is a program of Christian Youth Theatre (CYT) in San Diego. CCT has been serving the community since 1981 with summer productions on Mt. Helix, Traditions of Christmas and San Diego Follies.

Traditions of Christmas is a family friendly musical, inspired by Radio City Music Hall’s Christmas Spectacular.  It celebrates the Christmas season with songs, dancing and stories that have become traditions for people all around the world. The production features a tapping kickline, dancing toy soliders, swing dancing, classic Christmas songs, a living nativity and much more. This year is CCT’s 21st year producing Traditions of Christmas and it continues to be a favorite Christmas “tradition” for families all over San Diego.

To learn more about Traditions of Christmas, visit cctsandiego.org