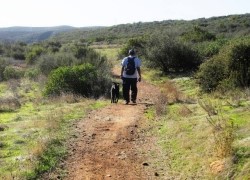 April 15, 2014 (Poway)--San Diego County and Poway are teaming up on an ambitious proposal to connect the region’s vast network of hiking and equestrian trails and other popular outdoor attractions.

The Poway City Council and the county Board of Supervisors, in separate votes last week, agreed to work together to seek grant money and other funds to buy as many as 800 acres of open space near Iron Mountain, on the eastern edge of Poway.

Supervisor Dianne Jacob says, “We have a tremendous opportunity to close a crucial gap in our trail system and open up more of our beautiful backcountry to the public.”

The land acquisition would allow officials to link Iron Mountain, Dos Picos Park, Mount Woodson and Lake Poway via trails that would include a pedestrian and wildlife bridge over state Route 67. The bridge would tie together existing paths spanning the length of the county.

Poway Mayor Steve Vaus observes, “For decades there’s been a missing link between far flung trails, parks and open space.” Connecting these treasures would be hailed by hikers, equestrians, and nature lovers now, and for generations to come, as a masterstroke.”

The land purchase would preserve additional wildlife space in the Poway area and expand recreational opportunities for residents and visitors.

The ambitious vision includes a bridge is built over Highway 67 to allow people to hike and ride all three of Poway's storied peaks: Blue Sky, Mount Woodson, with its famous Potato Chip Rock , and Iron Mountain, all in one day without ever leaving the trail, notes Poway Councilman Jim Cunningham.

The Poway City Council approved its partnership with the county on April 7. The Board of Supervisors backed the agreement the next day. The pact says they will “pursue funding sources to purchase additional open space in the Iron Mountain vicinity.”

“I’m confident we can work together to find a future funding source or grant money that will help make this a reality,” said Jacob.