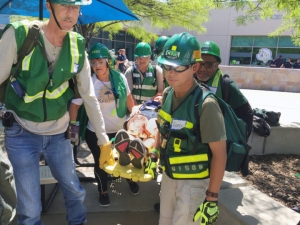 April 26, 2017 (Rancho San Diego) - More than a hundred emergency response volunteers from throughout San Diego County assisted “victims” of a simulated explosion during a test of their skills at Cuyamaca College over the weekend.

Community Emergency Response Team (CERT) members are residents certified in basic emergency skills such as putting out small fires, triage and minor search and rescue. Twice a year, the teams participate in regional exercises that allow them to train together.

CERT teams play an important role in a comprehensive approach to readiness. In a large-scale disaster, fire or police may be tied up, and a CERT volunteer might be the first to respond.

“In a traditional drill, we do skill testing stations and all the supplies are there, but in the CERT program, we say, ‘You have to show up prepared with all the supplies you need.’ So, this exercise was more realistic with what we teach them versus how we normally train,” said Teresa Greenhalgh, program manager for the San Diego County Fire Authority CERT, Southern Division, who planned and oversaw the exercise with East County, Poway and Escondido CERTs and the San Diego County Office of Emergency Services. “The skill learning at those stations is important but it’s also important to roll out a whole scenario and say, ‘OK, this is what you’ve learned, now how does it play out?’ So, that was the intent of this drill and it went very well.”

At the outset, members from 32 CERT groups were told only that they would be starting out in a classroom training adjacent to an indoor commons area on the campus. Suddenly, a loud explosive sound was played over the speaker system and then immediately afterward a fire alarm started blaring. CERT members filed out of the room in response to the fire alarm, and as they walked out, they noticed that the chairs and tables were overturned in the central area of the building. Mock victims were screaming out in pain and begging them to help. They craned their necks trying to figure out the scenario as they moved to safety.

CERT teams had to organize in order to perform the various tasks that included assessing the scene and the safety of sending in people, forming a triage team, calling in emergency resources, rescuing victims and putting out a small fire, said Andy McKellar, Emergency Preparedness Coordinator for Heartland Fire & Rescue.

Once outside, CERT members conferred and formed a plan. After some time, two members returned to try to count victims from one side of the room and ascertain the situation. They reassured wailing victims they’d be back as they went back to report the findings to the larger group.

Before activating, the group had to get approval by a fire department official and establish a loose incident command system. Many of them had never met before that morning.

After another 20 or so minutes, members in groups of two or more came back inside and asked the victims if anyone could walk out on their own. They assisted a few out and eventually begin assessing injuries to prioritize who to help first. They found a backboard to transport some people and practiced carrying people out. They also used tarps to put “victims” on and carry them out in a sling-like fashion.

“I think it was a great experience because you get a lot of hands-on, and you get the stress factor too,” said Jose Jasso, 37, a Chula Vista CERT member. “It gets kind of real. That’s when you notice that some of the stuff you learned, you’re doing it wrong. And then the staff is giving you pointers and that’s great. We were able to help a lot of people.”

Fire department coordinators and trained CERT instructors followed the teams around and guided them — letting them know they could not simply carry people out and that they had to have an equal number of people on each side of a backboard when carrying someone out. The mock victims added some realism to the exercise by acting hysterical, screaming in pain and speaking in different languages. One bickered with team members who passed her by or tried to assist her.

The gory makeup was applied both by members of Greenhalgh’s CERT and from San Diego City College’s theater effects department.

“You want to be able to have a scenario or an environment that is as close to real as possible because there’s nothing that can substitute for realism. You could see that the CERT members were taking it seriously,” said Issac Sanchez, CAL FIRE public information officer.

Sanchez said he would absolutely encourage people to consider joining a CERT program. CERT members were activated during the June 2016 Border Fire in Potrero and were an integral part of the community response, helping families and property owners affected by the fire, he said.