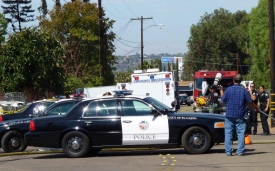 “He was shot in the left front part of his head and the bullet traveled around in his skull and then outside,” Lt. Mark Coit told East County Magazine today. “He has a fractured skull and internal bleeding.” Officer Slocum underwent surgery last night and is in critical but stable condition, said Lt. Coit.

Kevin Collier had texted messages to friends saying he had shot his young daughter Rhilee Jean Collier, and his mother-in-law, Beverly Rakov, then set fire to her house. A caller to 911 reported seeing the suspect walk into the residence with a gun and said he started a fire. Officer Slocum and his partner, Officer Tim McFarland, were first on the scene. “Officers were told in a call that he possibly had long arms and hand guns,” Lt. Coit noted.

Today, the body of a young girl believed to be Rhilee Jean Collier was found dead in a truck that Collier used for his work. She had apparently been shot in the head, Coit revealed. Two other bodies have been found in the residence. They are believed to be Rakov and Collier, though positive identification by the medical examiner is pending.

Collier's wife, who used to work at Cheetah's strip club, recently filed for divorce and sought sole custody of their 14-month-old daughter, 10 News reports.  Asked whether Collier’s estranged wife had been located, Coit responded, “She is safe.”

Both Collier's father and brother had filed for restraining orders against him in 2003, claiming harassment and physical violence.  Collier recently filed for bankruptcy, 10 News reports, and formerly worked at a mall that is now a strip club.

A video shown on 10 News, shot by a local photographer, showed Officer Slocum clutching his neck following the shooting. He collapsed within the suspect’s line of fire. Officer McFarland, a rookie still in training after graduating from the El Cajon Police Academy in January, McFarland dragged Officer Slocum to a safe position, aided by two citizens. All risked their lives to save the fallen officer , with the shooter then still at large. Now, however, authorities believe Collier perished in the fire.

Officer Slocum, who is married with two children, joined the EL Cajon Police Department in March 2007. Officer McFarland started with the department as a maintenance aide in 2004, later promoted to a communications operator and dispatcher until he was hired as an officer, training under Officer Slocum.

Crystal Magdowski, her husband and daughter were visiting her brother and his two young children one block away when the shooting began. “My brother had the gunman put the gun on him,” she recalled adding that her brother, John Bulick, was on his way to the store but returned after being threatened by the shooter. “He took the kids into a room with no windows,” she said, grateful that the children are too young to understand the danger at hand. They were later evacuated for the night.

Heartland Fire was the first fire authority on the scene, however firefighters were prevented from entering the fully engulfed residence due to the gunman inside. “It burned for several hours,” Rick Sitta, Deputy Chief with Heartland Fire told East County Magazine. “Because of the shooting potential, the Police Department allowed us to go through neighboring houses with hoses.” Aerial helicopter water drops saved nearby homes, though one had minor damage, he added.

Members of the Bomb/Arson Squad assisted El Cajon detectives in searching the residence to recover evidence and discover the cause and origin of the blaze.

This is a really good read for me. Must agree that you are one of the coolest blogger I ever saw. Thanks for posting this useful information. This was just what I was on looking for. I'll come back to this blog for sure! aksesoris wanita