December 4, 2012 (San Diego)--In what is hoped will be a model for future trainings and a revolution in architecture, Southwestern College recently conducted a class called “Smart Building Technician.” The name doesn’t begin to do justice to the depth of the material covered in the class, which was made possible through a grant to UnitedGREEN from SDG&E arranged by Heartland Coalition board member Chuck Brands.

Instructor Kimon Onuma (at left in green shirt) lines up the class participants (including course manager Chuck Brands fifth from left in white shirt) for a graduation photo. 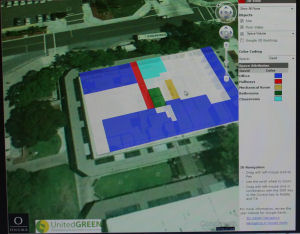 The class was team-taught for four hours on each of seven Saturdays. The instructor for three of the classes was internationally acclaimed architect Kimon Onuma, renowned for creating the Onuma System for real-time modeling of buildings and cities to incorporate all aspects of a lifecycle from construction to resources consumption.

“The students have taken to it really quickly,” said Onuma. “The community colleges are especially interested in this. It’s a big deal to save money on energy, because you can spend that on other things—allow more students into classes.”

Onuma has a casual teaching style so that although what he is talking about is at times very technical, he explains it such simple terms that students of varied backgrounds and education levels can easily absorb the information.  He’s not afraid to ask for input from the students, acknowledging that they know things he doesn’t. The students in the class ranged from teenagers to people in their seventies and eighties with decades of real-world experience. One student was an active-duty Navy Seabee who wants to learn more and apply it in his work.

The course teaches students to use computer modeling to design for the entire building lifecycle, not just the construction processes. Onuma has done other variations of this class, including one at USC, but this one was hands-on with specific focus on the lifecycle of the building. 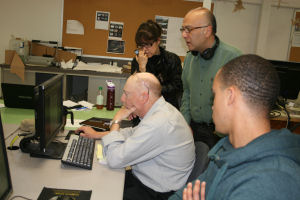 “Here (at SWC), we have the freedom to do what we want since it’s outside the norm. We’re in here on Saturdays, so we can do what we want,” he said. Not being faculty members also gave him and the other instructors the latitude to teach what they wanted, not to adhere to a strict school-set curriculum.

Dan Hendrickson, 75, a local sustainability expert attending the class, found the amount of information so amazing he referred to it as “drinking from a fire hose.”

Elan Sorrell is 24 years old and a recent graduate of UC Berkeley with a degree in architecture and a minor in sustainable design. He’s a Chula Vista native who did his prerequisites at SWC before going to Berkeley. He enrolled in this class because even after being at the UC, he noted, “I thought I was missing something. One of the things I was interested in was building modeling.” He had never heard of Onuma or BIM (Building Information Model) Storms while he was at Berkeley.  “I hope to get more involved in the BIM Storm process, I’d love to do more of that,” Sorrell said. “I had the degree, but I didn’t have practical architectural knowledge. I have to keep updating my knowledge.” 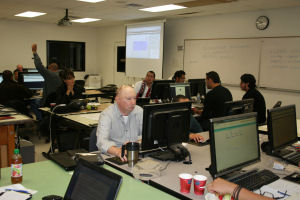 BIM allows people to share information in real time across various platforms, including the proprietary Onuma System. “No one can know everything, so we have to collaborate,” say Onuma. It allows planners to take into account various factors such as: if you replaced the tile floor with carpeting would it be cost-effective? Would the maintenance costs go up or down over the life of the flooring and the building? Would energy consumption be effected?

During the seven weeks of the course, the students took on the massive project of modeling all 496,000 square feet of the buildings of the Southwestern College campus with data that can be used for real-world applications. The college hopes it will help them save money on energy costs and make planning for future expansions and remodels more efficient. Now there is information to benefit the college, such as what would be the perfect classroom for a certain number of students at a certain time of day to maximize facilities use and minimize resource consumption.

Although the class ended before the project was finished, the students want to go on working on it after the class is over to gain more experience and provide more complete data to the college.

Student David Sanchez took it upon himself to create a web site so the students can stay in touch with each other and so that Onuma and the other instructors can continue to mentor the class attendees as they pursue this worthwhile endeavor.

“I want them to come away with a different understanding of architecture. They have already been trained in architecture, but this is to look at it differently,” said Onuma, adding that students are “already wired to be interested in energy efficiency. We want them to be ready to work on projects for the community college and other large projects. They are collaborating with each other to do things a student can’t do alone.” 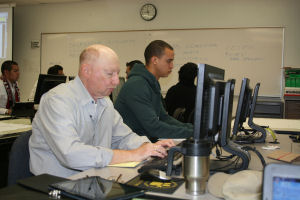 It has often been said that knowledge is power, and in this case, knowledge can save electrical power. Too often academic knowledge is just that: academic. This class has applications and implications for currently existing building and structures still on the drawing board.

Onuma says the training will be in demand in the job market: “There are opportunities if you have a broader view. “Technology is changing so fast, you have to keep learning, reinventing yourself every few months.” Next year, Onuma will be chair of the Technology Committee of the American Institute of Architects and is hoping to push the envelope and make changes. He sees architects changing from just being part of a big firm to being an individual with special skills. His goal is to “empower people to do new things. If you build up these skills, there will be a demand for this.” 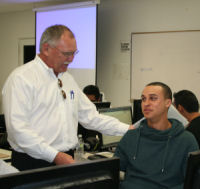 Mike Lavell of Virtual CX and Mark Walter of Iris Energy were the other instructors, at times teaching via an internet video linkup. Brands, the course manager, wanted to provide the best experts on the subject, even if they weren’t in San Diego. He wanted instructors who work in the field and could share life lessons, not just academic knowledge with the students. Lavell and Walter were online for the final class to thank the students and encourage them to carry on the good work they have started.

Brands will be meeting with officials at the college to see what the next steps will be. He hopes that due to the success of this pilot class that funds will be found either from the college or other sources to fund future sessions of this class and more advanced classes which could be of further benefit to the college, the community and the environment.

At the last class, held December 1, each of the students was awarded a certificate of completion, but they know their work is far from completed—and they hope to go attack it with a zeal for changing their surroundings.

Walter G. Meyer is a contributor to East County Magazine and author of the acclaimed novel Rounding Third.