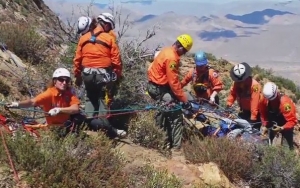 August 18, 2014 (San Diego) - San Diego County Sheriff's Search and Rescue, or SAR volunteers got to test their newly acquired skills after a training session turned into a real-life rescue. The crew-in-training hoisted a pilot, who crashed his hang glider near Mount Laguna, back to safety.

More than a dozen SAR volunteers were on the Pacific Crest Trail off Kwaaymaii Point on Sunday morning for training on rope rescues, which involves using rope systems over the edge of a building,  cliff or other steep, vertical terrain to help rescue a person in need.

The volunteers were packing up their gear around 12:30 p.m. when a pilot launched just 25 feet away from them. He had crashed upon takeoff.  So volunteers immediately began setting up ropes and pulling the pilot back up to the road.

The 69-year-old was treated by paramedics for bruises.

SAR is an all‐volunteer unit. Together, they perform wilderness and urban rescues, as well as search for missing and at‐risk persons. Teams are available 24 hours per day to respond to local, state and federal agency requests.

Learn more about the program at the SD County Sheriff's volunteer site.

The Point is a favorite place to stop to enjoy the desert view but there might be more than a breeze blowing. I don't know the conditions that day but have been there when walking or standing was a challenge due to high winds.