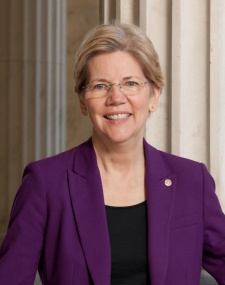 April 22, 2015 (Washington D.C.)--There’s a battle brewing between the Democratic Party’s labor and business wings over the impending Trans-Pacific Partnership, or TPP, that the Obama administration hopes to reach with 11 Asian-Pacific nations.

Senator Elizabeth Warren has been an outspoken critic of the plan, prompting the President to call her “wrong” on the trade issue.

Now Warren has fired back with a tweet to her supporters which states, “The Administration says I’m wrong – that there’s nothing to worry about. They say the deal is nearly done, and they are making a lot of promises about how the deal will affect workers, the environment, and human rights. Promises – but people like you can’t see the actual deal.”

The Obama administration and business interests have claimed the trade pact would benefit the American economy and the middle class.

But opponents including labor unions say the TPP and the fast-tracking that it authorizes would help the rich get richer—at the expense of U.S. workers.  If the TPP is approved, Congress could not make any changes to any future trade deal – only accept or reject the proposal in its entirety.

Warren has launched a petition to oppose the TPP, stating, “When giant corporations get to see the details and the American people don’t, we all lose. Let’s level the playing field: No vote on fast-tracking trade until the public can read the TPP deal.”

The U.S. Business Coalition supports the TPP. It claims that “TPP negotiations offer an important opportunity for American companies and workers to level the playing field and open access to some of the world’s fastest growing markets.” The business group notes that in 2013, two-way trade in goods between the 11 Asia-Pacific countries negotiating TPP and the United States exceeded $1.5 trillion.

But 350.org, an organization devoted to halting climate change, warns that the TPP also threatens to derail climate change action.  The group states that “ leaked text reveals that the TPP would empower corporations to directly sue governments in private and non-transparent trade tribunals over laws and policies that corporations allege reduce their profits.”

That means that legislation designed to address climate change, curb fossil fuel expansion and reduce air pollution could all be subject to attack by corporations as a result of TPP.  So could regulation of food labeling, workers rights and human rights.

A statement from 350.org states, “The movement we are building locally, nationally and globally to move beyond fossil fuels and create a safe climate future is growing by the day and the fossil fuel industry is getting scared of the uncertainty ahead. The TPP is a symptom of this fear,” the environmental group concludes, calling the TPP a massive bid to overthrow restrictions on corporate polluters.