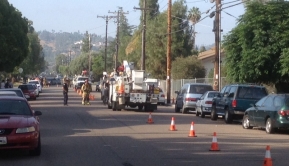 Residents are without power in this area of Lincoln Avenue between Lexington Avenue and East Main Street. It may be several hours before power can be restored as S.D.G. & E. crews work to replace damaged power lines.  No injuries were reported.  Firefighters will remain on scene until S.D.G. & E. crews complete the repairs and restore power.