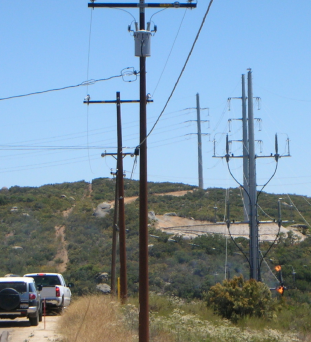 June 18, 2012 (Alpine) – A transformer fire broke out this afternoon at the site of the new Sunrise Powerlink, where the high voltage line had just been energized, Incident Page Network reports.

“I can confirm that two transformers are on fire,” said Lori Bledsoe, editor at The Alpine Sun.  The transformers are taking power from the underground portion of the Powerlink and transferring the electricity into overhead lines, she added.

Bledsoe provided a photo showing the burning transformers, taken by a passerby.  The incident was reported in the 4000 block of Alpine Blvd. in the vicinity of Star Valley Road.

Freelance photographer Greg Torkelson was also at the scene. He has stated that SDG&E tried to stop him from taking photos, until he moved onto property nearby not owned by SDG&E. View his video of SDG&E attempting to stop photography of their equipment burning:

On June 18 at about 2:30 p.m., one of the overhead-underground connectors on the Sunrise Powerlink malfunctioned.  SDG&E’s protective control devices detected the problem, immediately de-energized the affected equipment and notified SDG&E.  Power flow on Sunrise Powerlink was unaffected by the portion of the line that was de-energized.

The malfunction was isolated to a single connector at a termination point where the underground system transitions to overhead, located south of I-8, just east of Alpine.  The infrastructure and connectors involved in the incident are standard electrical transmission equipment and are not unique to the Sunrise Powerlink.

The resulting malfunction caused a small fire which was quickly contained.  SDG&E and Cal Fire crews responded to the incident.  The cause of the malfunction is currently under investigation.  Additional information will be provided as it becomes available.

SDG&E has a Multi-Agency Fire Prevention agreement in place with local fire agencies for the Sunrise Powerlink to help coordinate communications and work activity to help ensure public safety and firefighter safety is a priority.

This portion of the line was energized on June 14, 2012. The entire transmission line was officially energized and put into service on Sunday, June 17, 2012.  Contrary to local media reports, this is the only incident involving the Sunrise Powerlink since energization commenced.

The Sunrise Powerlink is now part of California’s transmission grid and under the control of the California Independent System Operator.