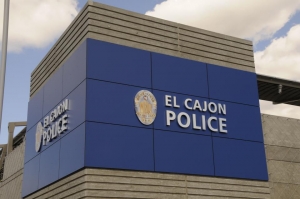 “The officer, a 28 year veteran, has been admitted and is still in an area hospital with significant injuries,” says Lt. Rob Rainsweiler, adding, “After Cook stopped assaulting the unconscious officer, a female MTS employee in the restaurant grabbed the officer’s radio and called for help. Since the downed officer was alone, it may have taken much longer to get medical aid to him if it were not for the quick thinking and willingness to get involved of this Good Samaritan.”

Cook fled the scene as officers were responding. Thanks to tipsters who reportedly followed him, Cook was found in the center median of Fletcher Parkway.

He ignored commands to surrender and took a fighting stance., Lt. Rainsweiler said. A taser was deployed to control Cook, who was taken into custody without injury.He was found to be in possession of drug paraphernalia and methamphetamine

Cook is charged with attempted murder of a police officer, mayhem, robbery, threatening a crime with intent to terrorize, possession and being under the influence of a controlled substance. He was on parole for a prior offense and his parole has been revoked; he is ineligible for bail.

Anyone with information about this case is encouraged to call the El Cajon Police Department at 619-579-3311.

People like this, who have proven they cannot be rehabilitated, need to be removed from society...permanently. Hopefully, a judge agrees and sentences him accordingly. Life w/o parole.