Event at Heritage of the Americas Museum attracts a full house 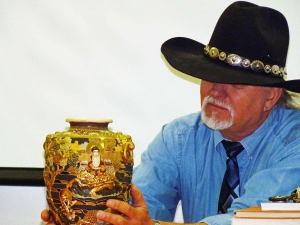 April  20, 2011 (Rancho San Diego) – The woman seated next to me at Saturday's Museum Roadshow tucked a hidden object in a shopping bag and confided, “I got this at a flea market.”

My own flea market find, an antique coffee pot, also turned out to have some value. Made in 1871, it had just enough ornate embellishments to be intriguing. Helm pegged the value at at least $225, and maybe a lot more. Heartened, I came home and did some research online—where I discovered that the silversmith was a descendant of the Pilgrims and was an award-winning craftsman alongside Gorham. 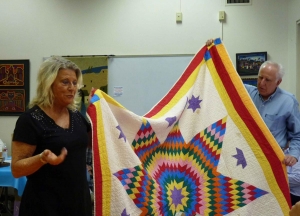 One couple held up a patchwork quilt hand-stitched by a relative who, according to a family story, was a direct descendent of George Washington. Washington may not have slept here—but his descendant’s connection to the quilt could increase it’s minimum $1,000 value ten-fold if the story can be authenticated. The couple left, inspired to seek documentation through relatives or, perhaps, ancestry.com.

The daughter of a local rancher brought in an archaeological find made by her father on his private property near Green Valley Falls in the Cuyamaca area. “I can still see him running down,” she recalled. “He found it between two large rocks,” she recalled. 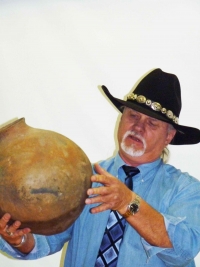 The find is a large olla, or pot, of Kumeyaay or Digueno Native American origin without a single crack or chip. “This is a magnificent piece of San Diego archaeology,” said Helm.

Not every find was a treasure. One arrowhead was estimated to be worth $10. But some Indian blankets, baskets and jewelry were worth substantial sums.

One woman brought in an original De Grazia painting acquired from a friend’s estate. Helm estimated it’s worth at several thousand dollars, perhaps as much as $25,000 A man’s collection of tie-tacks was valued at $2,500; a stunning Zuni turquoise and coral concho belt at $1,500. An Olaf Wieghorst plate could fetch $200. A Hopi bowl? $500. A 1,500 year old piece of Native American pottery in grey tones was worth $2,000, while a 19th century primitive painting of a Native American chief was valued at least $1,500. “I’d take it out of the frame to see if you can find the artist’s name,” Helm advised. 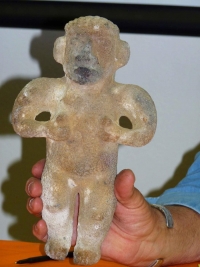 Most touching was a story told by Angell Dunn, a local woman who brought in a charred statue purchased in Mexico by her father. “We were burned out in the fire,” she said. “This is all that survived. It fell from the second story to the first.”

A big smile brightened her face when Helm informed her that the item had more than sentimental value. “It’s pre-Columbian, from Costa Rica ,” said Helm, who valued the family treasure at around $1,500. “The burn didn’t hurt its value a bit.”

Local collectors and flea market shoppers will soon have even more to smile about.

“We had a lot of people asking if he would be back,” Kathleen Oatsvall, curator at Heritage of the Americas Museum, said of Helm. Based on the success of this event, she has invited the appraiser to return—and he’s agreed, Oatsvall disclosed. Watch for more Museum Roadshows coming soon.

If you haven't yet visited Heritage of the Americas Museum, enjoy a free visit--with our compliments!  Just clip this coupon and bring it in for your free admission.

For more information on the museum, considered among the finest on a community college campus, visit www.cuyamaca.edu/museum