November 27, 2014 (Washington D.C.) – The U.S. State Department has issued a travel warning due to the continued threat of protests and violent incidents in Mexico.  U.S. citizens are advised to avoid road travel within all areas of Guerrero including along the main toll road 95D to and from Mexico City and Acapulco.

U.S. citizens are also warned not to participate in protests in Mexico, since the Mexican constitution prohibits political activities by foreigners.  Americans are urged to avoid areas of demonstrations, which could result in detention, deportation, or worse.

The region has been rocked by protests over the disappearance of 43 student protesters in Iguala. Burned bodies found in a mass grave may be those of the missing students. There are allegations that they were abducted by police on orders of a mayor and turned over to a gang that murdered them. Mexico’s  President Enrique Peña Nieto has called for constitutional reforms to allow the federal government to takeover local police departments, CNN reports. The Mayor of Iguala and dozens more have been arrested by federal police. 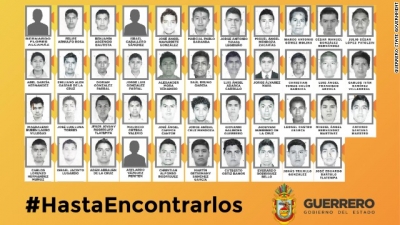 Yesterday, 11 more mutilated and decapitated bodies were found, as the violence continues.

14 U.S. Senators including California Senators Dianne Feinstein and Barbara Boxer have sent a letter  to Secretary of State John Kerry voicing concerns over the situation in Mexico, according to Reporting San Diego.  The letter reveals that 22,000 Mexican people have gone missing over the past ten years. The Senators ask Secretary Kerry to have the U.S. offer investigative and forensic resources to the Mexican government and to see that the perpetrators are ultimately brought to justice.

A poster (right) was issued by the Guerrero goverment showing faces of the missing 43 students and asking help to find them.

Major protests have been occurring in the region. Demonstrators could block roadways and take over toll booths, the State Department warns, adding that even peaceful protests could turn violent.

Travelers  already in the region are advised to follow the same restrictions ordered for U.S. government personnel. Avoid going out after dark. During the day, remain in the hotel zone; the popular tourist area of Diamante has been less affected by violence.  Avoid non-essential travel to areas further than two blocks inland from Costera Miguel Aleman Boulevard which runs parallel to the major beach areas.

Be vigilant and take appropriate steps to increase your personal security; be aware of your surroundings and monitor local news stations for updates.

The State Department strongly recommend that U.S. citizens traveling to or residing in Mexico enroll in the Department of State’s Smart Traveler Enrollment Program (STEP) at www.travel.state.gov.  STEP enrollment gives you the latest security updates, and makes it easier for the U.S. embassy or nearest U.S. consulate to contact you in an emergency.  If you don’t have Internet access, you can enroll directly with the nearest U.S. embassy or consulate.

You can also monitor the State Department's website to find current travel warnings and read country specific information for Mexico.  In addition, you can check the Mexico City Embassy homepage and messages for U.S. citizens for the latest emergency, security, and routine messages.  You can also get updates by calling 1-888-407-4747 toll-free in the U.S. from 5:00 a.m. to 5:00 p.m. Pacific Standard Time  Monday through Friday (except U.S. federal holidays).  The U.S. Embassy in Mexico City is located at Paseo de la Reforma 305, Colonia Cuauhtemoc, Mexico, D.F. and is open 8:00am to 5:00pm Monday through Friday, switchboard phone number (dialing from the United States) 011-52-555-080-2000, http://mexico.usembassy.gov/eng/eacs_hours.html.

If you are a U.S. citizen in need of urgent assistance, dial the main switchboard number and ask to speak to an American Citizen Services staff member for assistance. Follow the State Department on Twitter and Facebook, and download  its free Smart Traveler iPhone App to have travel information at your fingertips.