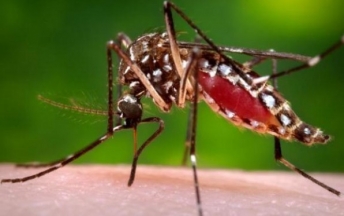 August 21, 2016 (San Diego) – California health officials are warning travelers coming home from Zika-infected places to use insect repellant and practice safe sex for several weeks after coming home—even if you’ve had no symptoms of the virus. Here’s why.

The mosquitoes that can transmit Zika are found in San Diego and other parts of our state.  So far, the local mosquitoes haven’t been found to carry the Zika virus. But if a local mosquito bites a recent traveler with Zika virus in their blood and then bites other people, the virus can spread, causing outbreak here.  Zika virus can also be transmitted via sex for up to six months.

Most people with Zika have no symptoms and aren’t even aware that they are infected.  But Zika can cause serious birth defects if pregnant women are infected, including microcephaly, or shrunken brain, in infants.  Zika babies can have seizures, blindness, deafness and constant crying in addition to brain damage.

Zika also causes Guillain-Barre syndrome, a rare neurological condition, in adults. Though Zika may cause no symptoms, the most common symptoms reported are a red rash, sudden fever, and joint pain.

So far, 170 Zika cases have been diagnosed in California but all are believed related to travelers. San Diego conducted hand spraying last week of several blocks in the South Park area (bordered by 31st and 32nd streets east and west and Grape and Elm streets north and south) where an infestation of the black-and-white striped Aedes Egyptian mosquitoes was found.

A local case of Zika virus in the San Diego neighborhood was diagnosed in a traveler from an area with a Zika outbreak.  Public health officials here say the spraying was done out of an abundance of caution to prevent local mosquitoes from possibly biting the infected person and starting a local outbreak.

In the U.S., a very widespread outbreak of Zika is occurring in Puerto Rico and about a dozen cases locally transmitted have occurred in Miami, Florida.

Officials are most concerned about travelers returning from the Olympics in Brazil, as well as from other countries in South and Central America, the Caribbean, and southern Mexico where Zika has been rampant.

Travelers to areas with Zika are urged to refrain from pregnancy for six months, as well as continuing use of insect repellant at home.  If traveling to an area with Zika, other precautions you can take include wearing long pants and long-sleeves and sleeping in an area with screens on windows and doors, or sleep under mosquito netting.

Locally, San Diego County health officials urge all residents to get rid of standing water, since Aedes mosquitoes can breed in just a thimbleful of water, and to make sure screens on your home are in good repair.