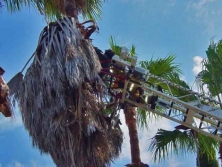 July 23, 2000 (Bonita)--It is a too common occurrence, but this time it did not end in death. Just before 10 AM members of the Bonita-Sunnyside Fire District responded to the report of a man trapped in a palm tree, in the 5600 block of Sweetwater Road. While the victim could not be seen from the ground Firefighters could hear the man calling for help. Rescue teams quickly raised their truck ladder 40 feet into the air and began cutting away at the palm fronds that had fallen on the 40-year old tree trimmer.

Firefighters had to proceed cautiously because any major shift in the palm fronds could cause additional injury. In many cases, trimmers cut the palm fronds above their head but don’t knock them down immediately. After a buildup, the ring of the fronds can slip down over the trimmer and the safety line. The weight of the fronds can be so heavy the victim cannot breath and can asphyxiate. The weight on the safety lines can prevent possible victims from freeing themselves or even moving.

In total, 14 firefighters responded to the “high rise” rescue and the victim was carefully freed in about an hour. The victim was transported to Grossmont hospital for evaluation but no major injuries were reported.

Fire officials remind residents that the trimming of a large buildup of dead palm fronds can be extremely dangerous, work best left to professionals. However even professionals need to be reminded to drop the cuttings as they go, so there will be no life threatening buildup