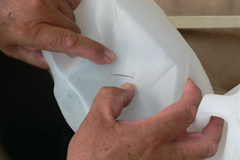 The decision has sparked international outrage from some and praise from others. It has also has drawn attention to the United States’ failure to reduce border deaths resulting from the border wall and heightened border enforcement in urban areas—tactics which have led migrants to attempt crossing the border in more treacherous mountain and desert locations including San Diego County. Last week, San Diego’s Coroner last week identified remains of two Mexican migrant men who died near Dulzura, the latest of hundreds of border crossers who perished in East County in recent years.

“This is an invitation to the courts. Stand for human rights,” said Staton, a California graduate student in theology, as dozens of protesters supporting his stance on humanitarian aid stood outside the court. But U.S. Magistrate Judge Jennifer C. Guerin informed Staton, “You are disregarding the jury’s findings and the court’s order,” the Santa Cruz Valley Sun reported.

Mexico’s human rights agency alleges that some 350 to 500 people a year die crossing the border – up dramatically since the U.S. implemented Operation Gatekeeper, although apprehensions of people crossing the border illegally have declined. U.S. policies of pushing migrants into unsafe areas lead directly to “at least one death every day of a migrant crossing the border,” concluded an October 21 report by the American Civil Liberties Union titled Humanitarian Crisis: Migrant Deaths at the U.S.-Mexico Border.

The Mexican agency, known by its Spanish acronym CNDH, recommends that the U.S. and Mexico make reducing border deaths a priority, including setting up a joint 911-type missing persons system, shifting border patrol resources to search and rescue, and allowing humanitarian aid groups to do relief work in border area, according to a Washington Post article on September 30, 2009 titled “Border Deaths Are Increasing.”

Staton is a member of No More Deaths, a group that supports humanitarian aid along the border.

Hunter, who represents the 52nd Congressional District that includes most of East County, was a vocal proponent of the border wall and tightened border security policies. (The Department of Homeland Security reports 4,111 border deaths since 1998, but those do not count deaths reported first to other agencies, so the real death toll is likely substantially higher. )

Others believe Staton deserves punishment for aiding illegal immigrants. “I, along with a few other volunteers, spend 300 hours per month removing litter/sign from public lands,” said Dan Russell, who has spent time along borders in East County as well as Arizona. “During the past 40 months, we have removed over 42,000 poudns of litter/sign from public lands…Much of this litter/sign is being discarded by illegal aliens crossing into our Country,” he added. Russell said he does nor support filling jails with those providing water for migrants, but does support community service for Staton.

Some take a harsher view. “Illegals know there is a good chance there will be water left by stupid Americans and so they commit [sic] suicide, on a hope and a prayer,” wrote Cheryl Burns in an e-mail sent to East County Magazine via a local Minutemen discussion group. “Illegals are coming and forcing their culture on Americans,” she said, also faulting migrants for committing crimes ranging from littering to assault.

A probation violation hearing for Staton has been scheduled for December 21.