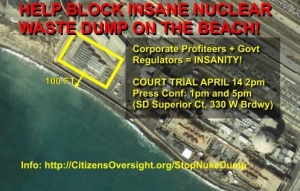 The Coastal Commission approved the permit to bury 3.6 million pounds of nuclear waste at San Onofre only 100 feet from the beach and only inches over the high-tide mark. The deadly nuclear waste will remain so for up to 250,000 years.  The location has 8.4 million residents within 50 miles, as well as a freeway and railway, making it a potential terrorist site, opponents say.

“This trial is our last clear opportunity to block it,” says Charles Langley, executive director of Public Watchdogs.

A pretrial press conference at 1 p.m. in front of the courthouse will be live-streamed at  https://www.facebook.com/citizensoversight/.  A post-trial press conference with Citizens Oversight founder Ray Lutz and attorneys from Aguirre & Severson will be held in the late afternoon after the hearing at the same link.

Read details of the case:  http://citizensoversight.org/StopNukeDump

Ray Lutz, an engineer and national coordinator of Citizens Oversight, says after carefully reviewing the permit, he became convinced that construction of the nuclear storage facility should be blocked. He filed suit in October 2015. Lutz states, “By blocking this permit, we can take a closer look at all the options and hopefully avoid this ridiculous decision.”

The lawsuit contends that alternatives were not considered by Southern California Edison, the plant’s owner.

Building a nuclear storage site in the Mojave would avoid putting millions of residents in San Diego and Orange Counties at risk, also making it an unlikely terrorist target, Lutz says. Other options include the Palo Verde Nuclear Plant near Phoenix, already licensed as a nuclear waste facility, or Camp Pendleton. The latter is three miles inland on a secure military base, eliminating risks of ocean tides or tsunamis and minimizing transportation risks, though it is still near population centers and in an earthquake zone.

The ground level is so close to the water level at San Onofre that Edison plans to build the structure half out of the ground. But Citizens Oversight notes, “even then, the ground water level is within inches. Any increase in ocean levels in the next 100 years will likely raise the ground water to exceed the bottom of the structure.”   Despite the threat of the coast eroding up to the storage site, the Coastal Commission has banned any improvement in the seawall to protect it.

Opponents of the project have also raised concerns that canisters proposed are licensed by the Nuclear Regulatory Commission for only 20 years, are too heavy to be carried by conventional railway cars or semi-trucks, and too thin to resist ocean air corrosion over time. There is no requirement for inspections.

Donna Gilmore, founder SanOnofreSafety.org said, “The NRC admits the thin-wall canisters Edison is using can crack and they have no way to find the cracks. Even partially cracked canisters cannot be transported and there is no seismic rating for cracked canisters.”

Moreover, Scripps Institution of Oceanography just completed an extended study of the faults nearby and determined the Newport-Inglewood/Rose Canyon fault is capable of a strong 7.4 magnitude earthquake. Earthquakes frequently result in ground liquefaction. Additionally, some geologists predict the coast will sink about three feet in a future quake.

A press release issued by Citizens Oversight asks, “Why, when the waste will be deadly for 250,000 years and the facility may be there for decades or centuries, should we have only one short public meeting, where speakers were limited to a measly two minutes, and where there was no real opportunity to provide information or testimony in opposition?”

In addition, most of the commissioners had improper secret ex parte meetings with the applicant, Southern California Edison, project opponents note.

See all related information at this project link: http://citizensoversight.org/StopNukeDump.