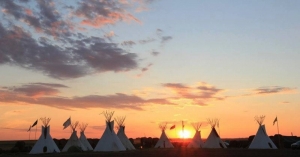 September 11, 2016 (Washington D.C.) – For members of the Standing Rock Sioux tribe and thousands of Native Americans who have joined in standing against the Dakota Access Pipeline, Friday brought bad news—and then good news.

A federal judge issued a decision denying the tribe’s request for an injunction to halt construction in order to protect sacred sites.  But within hours, a joint statement was issued by the U.S. Department of Justice, the Army Corps of Engineers and the Department of the Interior acknowledging “important issues raised by the Standing Rock Sioux Tribe and other tribal nations and their members” regarding both the pipeline and the approval process.

The Army Corps of Engineers will not authorize construction of the pipeline on Corps land bordering or under Lake Oahe pending a determination on whether reconsideration is needed of previous decisions under the National Environmental Policy Act or other federal laws.  The statement also asked the pipeline company, Energy Transfer, Partners, to voluntarily pause all construction within 20 miles east and west of the lake.

The statement added, “Furthermore, this case has highlighted need for a serious discussion on whether there should be nationwide reform with respect to considering tribes’ views on these types of infrastructure projects.” This fall, tribes will be invited to government-to-government consultations on two questions:  what the federal government should do, within existing laws, to improve meaningful tribal input on infrastructure projects such as pipelines and protect tribal lands, resources and treaty rights, as well as to discuss whether new legislation should be proposed to Congress.

The government agencies emphasized the rights of all Americans to assemble and speak freely, while urging those on both sides of the pipeline issue to adhere to nonviolence.  Violators may face criminal sanctions. The Dept. of Justice and the Interior indicated they would deploy resources to help defuse tensions, support peaceful protest and maintain public safety.

Earth Justice, called the federal agencies’ action to halt permitting and reconsider past permits “a game-changer” adding, “While the legal fight will surely continue for now, the Administration has opened the door for genuine problem solving.”

David Archambault II, chairman of the Standing Rock Sioux Tribe, stated, “Our hearts are full on this historic day for the Standing Rock Sioux Tribe and for tribes across the nation.”He added, ““Native peoples have suffered generations of broken promises and today the federal government said that national reform is needed to better ensure that tribes have a voice on infrastructure projects like this pipeline.”

The Sioux and other tribes dependent on waterways near the pipeline have contended that the pipeline, which would carry oil from fracking, poses grave dangers to their water supply in the event of a spill.

The tribes have good reason to worry.  Since 1986, the U.S. has had nearly 8,000 serious pipeline incidents in 48 states. Spills and explosions killed 500 people, caused over 2,300 injuries, and nearly $7 billion in damages. Pipeline spills have dumped 3 million gallons or 76,000 barrels a year into the environment on average, or 200 barrels every day, according to data from  U.S Pipeline and Hazardous Materials.

An encampment with thousands of tribal members formed near the site.  Emotions reached a boiling point earlier this month when the oil company bulldozed a two-mile long area that tribes contended was a sacred site and ancient burial ground. The company had not been granted an easement yet from the Army Corps of Engineers.

Tribal members calling themselves “protectors” of the earth surged through a fence opening to block bulldozers with their bodies.  Democracy Now’s Amy Goodman was at the scene and documented the horror as private security guards hired by the pipeline company attacked the protectors with savage dogs and pepper spray.   Here is an excerpt aired on Democracy Now, a syndicated show that airs on KNSJ:  https://www.facebook.com/democracynow/videos/10154446432358279/

Shortly after Goodman’s video of dogs attacking protesters went viral over the Internet, an arrest was issued for Goodman, a highly respected journalist, on a misdemeanor trespass charge.  I was doing my job by covering pipeline guards unleashing dogs and pepper spray on Native American protesters.”

A similar tactic occurred after the Ferguson, Missouri riots following fatal shooting by police of an unarmed black man.  A Washington Post reporter was charged with trespass and his case remains pending.

An arrest warrant for vandalism has also been issued against Green Party presidential candidate Jill Stein, who tweeted a photo of herself spray painting the blade of a bulldozer at the Dakota Pipeline site.  Stein called the Dakota Access pipeline “vandalism on steroids.”

The actions of the Dakota Pipeline company and its guards have sparked outrage across the nation, as photos and videos spread quickly across social media.

A  fund to raise money for legal defense of Sacred Stone Spirit Camp, where the pipeline opponents are encamped, has raised over $329,000 to date.  A petition asking the White House to take action has drawn nearly 200,000 signatures.

Reporting San Diego’s Nadin Abbott was at the scene downtown, where she interviewed a local Kumeyaay Nation tribal member on why the actions in North Dakota are so significant to all tribes. https://reportingsandiego.com/2016/09/09/san-diegans-protest-the-north-dakota-access-pipeline/

At the Sycuan pow-wow in El Cajon, the announcer informed those present that a collection was being taken up of funds to send in support of the Standing Rock Sioux.

On Monday night, September 19th, Activist San Diego, the nonprofit owner of KNSJ radio, is organizing a meeting with Standing Rock participants and local indigenous leaders to show solidarity with Standing Rock, where more than 100 Indian nations have come to support the Sioux people in their right for self-determination and clean water.

The event will be held on Sept. 19 at 7 p.m. at the Joyce Beer Community Center, 1090 Vermont St. in Hillcrest. Guests may bring gift cards and monetary donations.

The Sioux are no strangers to standing up against injustice.  When General George Armstrong Custer and his cavalry regiment came to remove the Sioux from their lands and send them to a reservation back in 1876, Sioux warriors responded by wiping out Custer and his regiment in the Battle of the Little Bighorn.

One image circulating on the Internet now in support of the Standing Sioux has a photo of General Custer and a caption which reads, “Trust me, put that pipeline elsewhere.”