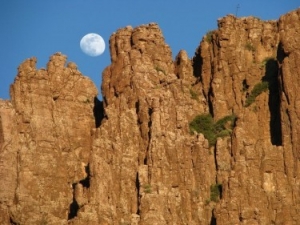 July 23, 2015 (Oak Flat Campground, Tonto National forest,  Superior, Arizona) - Recently we reported on the controversy over Congress giving Apache sacred land to a foreign mining company; now there is a petition you can sign on CREDO asking Congress to protect Apache sacred land and halt the sale, which was slipped into a Defense bill.

On the Fourth of July, I drove from Tucson to Oak Flat where activist are camped.   Hand-painted signs greeted me as I drove into legendary Oak Flat: “Stop the Apache Land Grab” and “No Copper Mine.”

The encampment is the genesis of a caravan to Washington D.C. that aims to bring attention to Oak Flat as the epicenter of the largest mining operation in the Northern Hemisphere, which would create a crater so huge it will be visible from outer space.

Driving through the quaint but ghost-like mining town of Superior, the towering cliffs above the town looked formidable.  The enormity alone took your breath away.  This is Apache Leap.

A two-lane tunnel appeared just as I thought I could go no further as the cliffs became vertical on the road ahead.  The sudden appearance of the tunnel was like something out of a cartoon.  Water was cascading straight down to the left of the highway at the end of the tunnel. 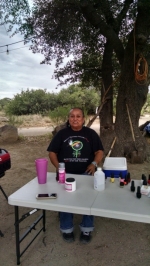 Driving up this impossible trail I could see, why this was once one of Geronimo’s favorite hide-outs. I have seen Oak Flat in photos and on maps but you have to be there in person to feel how unique and special this place is.  Like an oasis in the clouds.  A sanctuary in the middle of the desert.

Stepping out into the cool air I had gone from the desert to a tiny paradise-world complete with oak, poplar and pine trees with flowing streams, swimming holes and wild berries.  This high plateau was ringed with mountain peaks.  Indeed we were in the mouth of a volcano.

As the petition states, “It’s hard to imagine politicians in Washington making the same deal for this land if it were considered sacred and holy by any other major religious group.  But it’s sadly in keeping with a history of Native American mistreatment and dislocation.”

Cheena brought her daughters here just as her parents brought her here when she was growing up.  She showed me where the ancestors build earthen dams and spillways that slowed the runoff of rain water and melting snow.  Behind the rock dams were silt fields where corn, squash, radishes and melons grew.

Senator John McCain, who along with Senator Jeff Flake slipped in the language to give this land to foreign-owned mining giant Rio Tinto.   McCain took campaign contributions from the mining company’s subsidiaries.

Flake has even been a paid lobbyist for a Rio Tinto subsidiary in the past in support of a massive uranium mine in Namibia.  Both Senators have received mining money through numerous election campaigns spanning decades of time from the Arizona State Legislature to United States Senate.

The petition concludes, “We need to fight back against this deeply undemocratic move and show Washington that Americans won’t stand by as our legislative process is twisted and sold off to the highest bidder.”

Cheena Lopez was born and raised on the San Carlos Apache reservation though her parents are Chiricahua, Geronimo’s tribe.  As a family they spent part of every year in Oak Flat.

Like so many in the time of extermination, the Apache gave up millions of acres of land and agreed to live on desolate reservations for protection from bounty hunters and militias whose sole purpose was to kill Indians for the $25.00 dollar per scalp bounty or kidnap their children.  It was legal to sell an Indian orphan often fetching up to $60.00 dollars for a strong Indian boy, even more for an Indian woman child. 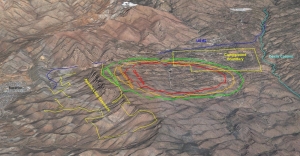 Apache were force marched to San Carlos.  They were given blankets exposed to deadly diseases and rancid meat to eat.  A small band escaped San Carlos and battled the Army to Oak Flat.  With nothing left to fight with besides sticks, rocks and their bare hands 87 men and woman leaped from the cliffs to the desert below rather than be captured and returned to San Carlos.

The spirit of those who chose to die with dignity lives in Oak Flat.