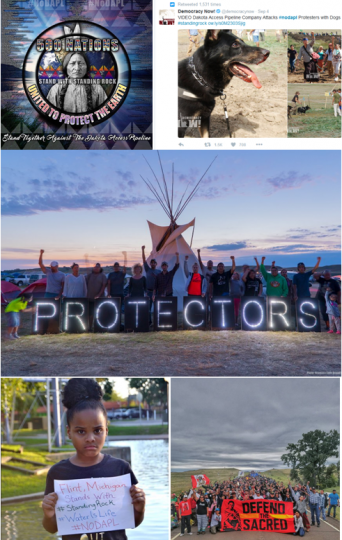 Update Sept. 6, 2016 3 p.m.:  Federal Judge James Boasberg in Washington D.C. today issued a temporary restraining order in response to the tribe's emergency request to halt machines destroying recently identified sacred sites: "The Court ORDERS that no construction activity on the DAPL may take place between Highway 1806 and 20 miles to the east of Lake Oahe. Construction activity to the west of Highway 1806 may proceed."

September 6, 2016 (San Diego) – Thousands of Native Americans with support from hundreds of tribes have converged  in  North Dakota, seeking to protect their water,  lands and ancestors’ remains from the Dakota Access Pipeline, also known as the Bakken pipeline. (#NoDAPL) The pipeline would transport oil from fracking from North Dakota to Illinois, passing over major waterways including the Missouri and Mississippi  rivers that are the lifeblood for tribes in several states.

The Standing Rock Sioux Tribe has filed a request for an injunction to halt construction, after discovering sacred artifacts at the site, and a court decision is expected this week. But the pipeline owner, Energy Transfer Partners, defiantly bulldozed a two-mile-long by 150-feet-wide swath over Labor Day weekend, despite having no easement approved yet by the Army Corps of Engineers.

On Saturday,  desperate to halt the devastation until a Judge could weigh in, tribal members marched at the site, with at least one chaining himself to earth-moving equipment.  A private contractor hired by the pipeline owner then attacked the Native Americans with pepper spray and with dogs including pit bulls,  leaving tribal members bloodied and outraged.

The dogs were not utilized by law enforcement,but by private security officers. The local sheriff claimed no injuries to pipeline opponents, citing injury to a guard. However tribal spokesman Steve Sitting Bear has said at least six people demonstrating were bitten, including a child, and 30 were pepper-sprayed. Some people posted photos of their injuries on social media including a  woman bitten on the breast. Democracy Now aired video of the assaults showing a dog’s mouth dripping with blood.  The protesters had no weapons other than flagpoles and sticks as they shouted out and sought to block the constrution. 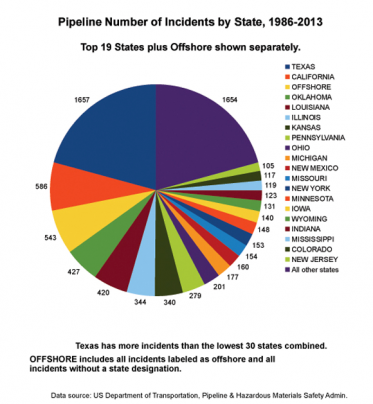 Standing Rock Sioux Chairman David Archambault has called the destruction “devastating” adding that ancient cairns and stone prayer rings were destroyed as the company filmed the confrontation via helicopter.

The tribes have good reason to worry.  Since 1986, the U.S. has had nearly 8,000 serious pipeline incidents in 48 states. Spills and explosions killed 500 people, caused over 2,300 injuries, and nearly $7 billion in damages. Pipeline spills have dumped 3 million gallons or 76,000 a year into the environment on average, or 200 barrels every day.  That’s based on U.S Pipeline and Hazardous Materials Safety Administration data, the  Center for Biological Diversity reports in an article titled “America’s Dangerous Pipelines.”  Much of the oil spilled is never cleaned up, polluting land and water for decades or more.

The company’s violent response and the Dakota Access Pipeline itself have sparked outrage and support is now pouring in from around the world ,including:

The movement has created its own logo which reads “500 nations stand with Standing Rock.”

It has also spawned a #NoDAPL feed on Twitter, as well as Twitter and Facebook pages supporting those traveling to North Dakota and an encampment near the site.

Pipeline opponents reject the term protestor, calling themselves “protectors” of the Earth and water. 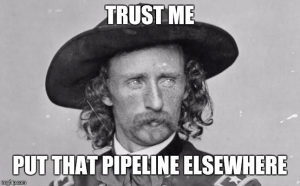 One protector posted an image of General George Armstrong  Custer, with a caption reading, “Trust me, pupt that pipeline elsewhere.” Custer, who  slaughtered many Indians, was  sent to remove the Sioux from their lands and send them to reservations back in 1876. Instead,  Custer and his cavalry regiment were wiped out by Sioux warriors in the Battle of the Little Bighorn.

The U.S. Army Corps of Engineers hasn't changed its position in the underlying lawsuit and claims it met its duty to consult with tribes, many of whom declined to participate in what they viewed as a flawed and rigged process.  But since the matter remains of great public interest, the Obama administration believes a short-term temporary restraining order is warranted against Dakota Access LLC to protect public safety, the Department of Justice said in a court  filing  Monday.

The partially constructed pipeline, if completed, would run for 1,172 miles and carry about 470,000 barrels of crude oil daily.  The company hopes to complete work late this year. Energy Transfer Partners, owner  of the project, touts the pipeline as needed to produce domestic fuel and create jobs, though documents filed with the federal government show much of the oil would be exported.

The company claims on its website that today’s pipelines are designed to exceed federal safety standards and that Energy Transfer Partners is committed to working with landowners to “minimize disruptions”, adding, “It is our intent to live up to our promises of openness, honesty and responsiveness before, during and after  construction and throughout operations.”

By bulldozing sacred sites over a holiday weekend before a judge could rule on an injunction,  knowing  thousands of Native Americans sought to protect the site from destruction, however, the company has made clear that it puts profits above the concerns of the site’s original inhabitants.

Note:  East County Magazine would like to hear from any Native Americans or other area residents or groups in  San Diego's  East County who are traveling to North Dakota to participate in this action or showing solidarity through local events.

When those greedy white people realize this is not their world to abuse, rape and desecrate?