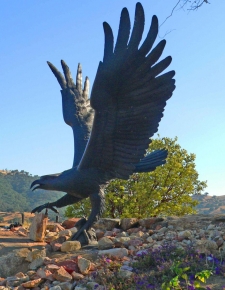 Tribal Chairman Virgil Perez said his Tribe’s agreement with the County allows the attachment of proceeds from the Tribe’s casino, but prohibits the County from seizing non-gaming funds.

Perez said he received notice that the County tried to seize every dollar the tribe had in over 20 accounts--including federal grant funds obligated for operation of the tribal government, housing, environmental protection, American Recovery and Reinvestment Act (ARRA) funds for road improvements, Indian Child Welfare Act matters, as well as state funds for elder and veterans services, and the minors trust fund.

“We are a federally recognized tribal government,” Perez said, “and the programs and services we provide to our people are vital to their health and welfare. Without these funds, we can’t meet our basic responsibilities our own citizens.”

Perez said he was shocked by the attempted seizure of the funds because, Thomas Bunton, San Diego County Deputy Counsel, had personally assured him the County would not attempt to take the Tribe’s government funds to which it was not entitled.

Under an arbitrated settlement reached in 2010, the Santa Ysabel Tribe is required to make periodic payments to the county. However, the tribe has been unable to meet the agreed payment schedule due to the financial condition of its casino. Tribal officials have tried to work with the county to make modified payment arrangements, but county officials balked at the tribe’s efforts to establish a reasonable payment plan and have been “stubborn and completely unaccommodating,” according to Chairman Perez.

County Counsel Thomas Bunton offered this response to an inquiry from ECM regarding the tribe’s allegations.

“The Tribe has consistently broken its contractual promises to make payments to the County to, among other things, pay for law enforcement services for the tribe casino.  The Tribe has refused to honor its contractual obligations even though a neutral arbitrator has found that the Tribe owes more than $3 million to the County and a Superior Court judge has confirmed the arbitrator’s award.  In addition, the Tribe has endangered the public by breaking it contractual promise to provide fire protection services for the patrons of the casino,” Bunton stated.

The County has repeatedly asked the Tribe to propose a specific payment plan to repay the monies owed the County, but the Tribe has refused to do so, he added. “ Accordingly, the County was forced to follow the legal process necessary to seize the Tribe’s bank accounts.:

Although the Tribe contends that the County seized bank accounts that contain non-casino revenue, the Tribe “has not provided any back up documents that show that the money in the accounts was derived from non-casino sources,” Burton stated in an e-mail to ECM. “In addition, the Tribe has refused to provide any information regarding the whereabouts of the $700,000 in monthly revenue generated by the Tribe’s casino.”

The Tribe suffered a large financial loss in October from a robbery that a Sheriff's official described as the largest casino heist in San Diego history.  Thieves cut through the roof to abscond with a large amount of cash.

“We’ve opened all our records to them, so they could see exactly how much money we have to work with,” he said. “We’ve never refused to pay; we’ve just asked for some consideration in working out a payment arrangement that we can satisfy without putting basic governmental programs and services at risk. Although the casino in not a big money maker, we continue to make our payments to the state, and pay approximately $1.2 million in state and federal taxes every year.”

Perez said the Tribe is proud that it provides good jobs for hundreds of people in the north San Diego County. “We’re a major employer in this area,” he noted. “In spite of the financial pressure we’ve been under, we have not laid off a single worker. You would think the County would put some value on those jobs. Instead, they’re apparently trying to put us out of business.”

The Tribe is pursuing legal remedies to protect its non-gaming funds against future County action.

“We took Mr. Bunton at his word, and that is a mistake we won’t make again,” concluded Chairman Perez.