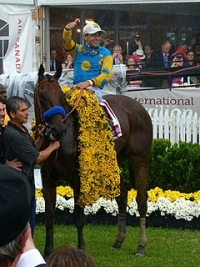 June 9, 2015 (San Diego's East County) - The winner of horse racing’s Triple Crown won his first race at Del Mar, right here in San Diego County--and may soon be coming back.  Track officials at Del Mar have told the Union-Tribune that they may increase the prize money for the upcoming Pacific Classic in hopes of enticing the owners of American Pharoah to compete.

American Pharoah last weekend made history by becoming the first Triple Crown winner coronated in 37 year--only  the 12th horse to achieve the highest honor in the sport.  Jockey Victor Espinoza rode American Pharoah to achieve victories in the Kentucky Derby, Preakness, and the Belmont Stakes--and announced he will donate 100% of his winnings from the Triple Crown to a charity battling childhood cancer.

American Pharaoh had a much easier run than his predecessors, maintaining the lead for most of the race to clock a winning time of 2 minutes, 26.65 seconds.  The other horses never came closer than a few lengths behind.

Whether we will see another Triple Crown winner in the near future is a mystery, but after 37 years, American Pharaoh certainly made it a very special day for sports fans.