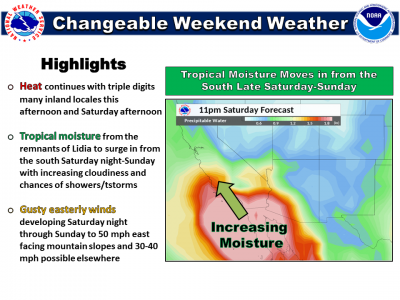 September 1, 2017 (San Diego’s East County) – If you’re  planning a picnic, barbecue or other outdoor activity this Labor Day weekend, be aware there’s a possibility of widespread showers and scattered thunderstorms due to tropical storm Lidia.

Tropical Storm Lidia has already wreaked havoc in Baja, Mexico, bringing flooding in Cabo San Lucas and closing airports at Cabo and La Paz. Some 20,000 tourists and thousands of residents have been evacuated to shelters there.

The storm could reach our region starting Saturday, with the greatest chance of rainfall on Sunday, though far less severe with no more than an inch of rain expected in any local spots.  Gusty winds are possible so be watchful for falling tree limbs or debris.

A heat alert remains in place. High temps could ease somewhat on Sunday, but the weather will still be very humid, the NWS predicts.

The chance of rain is low in the deserts, but highest in mountain and valley areas where thunderstorms could bring dangerous lightning and heavy downpours.