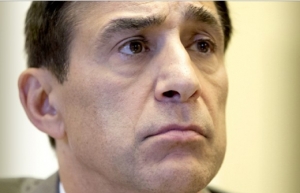 September 19, 2019 (San Diego) – Retired Congressman Darrell Issa has said he will run against Rep. Duncan Hunter if his appointment by President Trump to head up the U.S. Trade and Development Agency is not approved by early November.  But now, both Democratic and Republican leaders of the Senate Foreign Affairs Committee say that an FBI background file on Issa raises red flags.

Issa claims the info is already public on Wikipedia and dates back to his time in the Army, when he got a bad conduct rating and demotion amid accusations that he stole a car from another soldier.  “I have owned up to being a 17-year-old kid and not a very good private,” Issa said, the Los Angeles Times reports.

But according to Senator Menendez, Issa’s statement about the FBI’s findings is not truthful.  “If they were all public, then we wouldn’t be having the difficulty that we have,” he said.

Issa’s Wikipedia lists additional legal problems he reportedly encountered after his discharge from the military:

“Twice that year, he was arrested. In the first incident, he was indicted by a grand jury for an alleged theft of a Maserati, but prosecutors dropped the charge.[20] In the second incident, he was stopped for driving the wrong way on a one-way street, and a police officer noticed a firearmin his glove compartment; Issa was charged with carrying a concealed weapon. He pleaded guilty to a charge of possession of an unregistered firearm, and was sentenced to six months' probation and a small fine.[20] Issa has said he believes the record has since been expunged.[16]”

Issa later faced suspicion of arson after a company building he owned burned down.  According to the Wikipedia entry:

“An investigation of the cause of the fire noted "suspicious burn patterns" with fires starting in two places aided by an accelerantsuch as gasoline.[16] …Issa appeared to prepare for a fire by increasing the fire insurance policy by 462% three weeks previously, and by removing computer equipment holding accounting and customer information. St. Paul Insurance, suspicious of arson and insurance fraud, initially paid only $25,000, according to Issa.[16][24]”

Issa was also once named among the top 10 most corrupt members of Congress by Citizens for Ethics Reforms in Washington, or CREW.

It is unclear whether the troubling information in Issa’s FBI background check relates to any of the incidents above, or to something else.

If the Republican-controlled Senate refuses to confirm Issa, a Republican, to the trade commission due to failing to pass an FBI background check, it begs the question:  should voters consider this information disqualifying for Issa to be their representative in Congress, if he pursues his second choice option and runs in the 50thCongressional District?

I bookmarked both websites. However, as you wrote "it takes a bit of research" AND if such knowledge is to have any effect, these or similar websites have to be known and respected as non-partisan. Now I have bookmarked them and will use them; but I wonder how many people even know about them??? I also think they should include candidates education, previous job experience, previous "active membership" in various organizations. And we need a Constitutional Amendment to end Citizens United where corporations have been designated as "people" and can contribute as much money as they want to campaigns.

I have a suggestion. During the month before an election place at the top EAST COUNTY MAGAZINE in BOLD LETTERS the two websites with an explanation of why people should check them out and, perhaps, some guidelines for using them.

MountainMan, agree with you on all points.

I don’t like Issa, would NEVER vote for him; but I really DON’T LIKE how our political system dredges up unproven incidents. Though certainly not a plus, what Issa did in the military when a kid is NOT evidence of how as a mature adult he acts. Scientific studies show that the adolescent brain functions differently. While this doesn’t excuse his behavior, it should NOT play a role today. Grand jury indictments are not convictions and “suspicion of arson” is just that, “suspicion.” As for driving the wrong way on a one-way street, could happen to anyone and I would be willing to bet that all too many Americans own unregistered guns. As for Citizens for Ethics Reforms in Washington, I’d like to know what they based their naming him among the top 10 most corrupt member of Congress.

What is lacking often in American politics is an unbiased organization literally documenting blow by blow the actual positions each candidate has taken, e.g., votes, and documented relationships, e.g., monies received, from individuals and corporations that could indicated a bias when combined with positions taken and posting it on an easily available website.

People all too often vote based on allegations, irrelevant actions, and 30-second soundbites. And both parties often put up for candidacy individuals with little to no “real” information on their political positions, e.g., history. People confuse speeches with actions.

As I said, I would NEVER vote for Issa, based on his politics, plain and simple.

Just plug in a name such as Issa or Hunter and search through the tabs to find out what industries and PACs have given them the most money. Both got a lot from special interests.

As for CREW, they put Issa on their most corrupt list in part due to him breaking federal law to put material from a sealed wiretap into the Congressional record for political purposes, knowing he'd be immune from prosecution this way when anybody else would likely have landed behind bars for a long time. Here is our report, but the CREW links no longer work as they organization is no longer around.  https://www.eastcountymagazine.org/rep-darrell-issa-r-san-diego-earns-di...

As I wrote, I'd like to see someone tabulate both source of funding and votes and other actions in office. Unfortunately, many corporations and individuals donate funds to both party candidates, more to their candidate of choice; but to both, hoping will help gain access, etc. So, source of funding alone not dispositive. As for revealing a sealed wiretape, that is a valid point to make.

To the best of my knowledge, no other nation basis its elections to some extent on the amounts of monies spent and few other nations have revolving doors where regulators go back and forth between the industries they regulate and elected officials do the same. Historically both parties have done the aforementioned; however, over the past few decades the Republicans have done this to an extent that is so blatant that it is difficult to believe that their supporters aren't aware of this.

Put in your Congressional representative's name and you will see tabs to look up their voting record, funding, ratings from special interest votes, posoitions on issues, and speeches.  It takes a bit of research but it's all there. I wish there was a concise source of this that maybe compares side by side their biggest funders and how much their votes align. But you can get a pretty good idea at the votesmart site.

Issa along with Hunter is typical of the low ethical standards of republicans today. With the slimiest developer and congenital liar as their party's leader, is it any wonder that we have a convicted car thief and a soon to be convicted embezzler as candidates for our Congressional seat? When will all those well meaning voters get their heads screwed on straight and stop voting for republican scumbags just because they wave the flag?