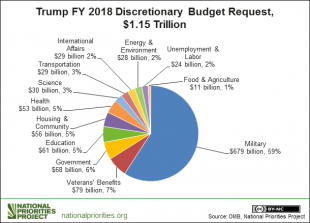 February 13, 2018 (Washington D.C.) — On the campaign trail, Donald Trump promised to reduce the federal deficit and to protect those he called the “forgotten men and women of our country.” Specifically, he pledged not to cut Medicare, Medicaid and other programs that benefit middle-class families and the poor. Those promises now appear misleading, given the actual proposal in the President’s budget plan rolled out on Monday.

Trump’s $4 trillion proposed budget would increase the nation’s deficit by over $1 trillion.  It would increase military spending by over 14 percent, with military spending accounting for 59% of the entire federal budget, while cutting funds for nearly every other domestic program. That includes huge cuts to Medicare and Medicaid which benefit one-third of all Americans, the New York Times editorial board reports.

How deep are the cuts?

Health and Human Services stands to lose over one-fifth (20.3 percent) of its funding. Medicaid would lose hundreds of billions of dollars. The National Institute of Health would lose nearly a sixth of its funding, including deep cuts to programs ranging from control of infectious diseases to cancer research to programs that protect Americans from heart attacks, strokes, and diabetes.  It even cuts by 26 percent funds for the Center for Disease Control’s center on birth defects and developmental disabilities at a time when Zika virus, which causes serious brain damage to unborn children, has made its way to the U.S.

Even Meals on Wheels faces cuts to the program that provides hot meals to homebound seniors.

Almost one-third of the Environmental Protection Agency’s budget would be gone.  The EPA enforces our nation’s clean and water laws, among other crucial functions.  The EPA has long been a target of pollution-producing industries and developers.

The Department of Education’s budget would be chopped by 10 percent.

The State Department, which aims to resolve international conflicts through diplomacy rather than war, face cuts of nearly 27 percent.

The National Science Foundation which funds scientific research projects nationwide would have its budget cut by 11 percent.

The Food and Drug Administration, which is in charge of protecting consumers from unsafe food or medications, would also have deep cuts that the administration hopes to partially offset by increase fees on medical products, which in turn would jack up costs to patients for medical devices.

Despite a nationwide opioid addiction crisis, Trump’s budget slashes by nearly 95 percent the funding for the Office of National Drug Control Policy.

The budget calls for elimination of subsidies that helped families with low and moderate incomes afford healthcare under the Affordable Care Act, and states would have to pay a larger share of the program, the Washington Post reports.

The President also wants to slash funds for Amtrak, despite several serious multiple fatality crashes, a well as programs that help state and local governments pay for transportation projects, belying his promise to improve our nation’s infrastructure.  According to the New York Times, the president’s numbers “don’t add up.”

A separate Trump infrastructure plan claims it would increase investment in roads and other infrastructure by $1.5 trillion over a decade, but the federal government would only provide a small fraction ($200 billion) of that amount.  The plan offers no explanation for how cities, counties or states could make up such loss of funds, and could force them to deal with private corporations for projects such as toll roads to recoup costs.

Trump did live up to one campaign pledge: his budget would eliminate 100 percent of federal funding for Planned Parenthood, even for non-abortion services such as birth control and women’s cancer screenings.

Trump calls his budget proposal “A New Foundation for American Greatness” but there’s little within it that would invest in making anything better, except for the military.

The Trump administration claims the budget, if enacted, would lead to 3 percent economic growth. Critics contend that’s unlikely and say the President’s budget ignores the growing and staggering cost of funding a federal deficit in excess of $29 trillion dollars.

Many of the programs on the chopping block have historically enjoyed bipartisan support.  It will be up to Congress to determine which of the President’s budget items to support, and it’s likely that Congress will make substantial changes before a final measure reaches President Trump’s desk to sign.

I gotta wonder what do all the Trump supporters think about POTUS now? Lies from the campaign trail which glaringly continue... and yet I'm quite sure many will still defend his totalitarianism actions. The pied piper leading his subservient minions to his distorted vision of what the United States should be like - modeled after his idol Vladimir Putin, Russia's dictator. We can expect many more folks to become homeless, due in large part to the ever increasing cost of rental housing, and without the help of federal government agencies such as HUD, this glaring issue will be exacerbated many times over. This includes seniors, disabled, and the working poor. Read the entire budget at: https://www.whitehouse.gov/wp-content/uploads/2018/02/msar-fy2019.pdf courtesy of: https://lifehacker.com