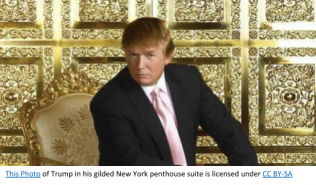 September 29, 2020  (New York) – The New York Times has published an explosive exposé on President Donald Trump’s finances after obtaining 15 years of tax records through 2017, which he refused to make public.  Among the top revelations:

Alan Garten, a lawyer for the Trump Organization, has claimed “the facts appear to be inaccurate” in the New York Times investigative report. Garten adds that Trump over a decade has paid “tens of millions of dollars in personal taxes to the federal government,” however the Times indicates Garten misleadingly included taxes paid for Social Security, Medicare, and taxes for his household employees.

with personal insults. Readers, please keep comments civil and focus on facts to support statements if you have information on an issue, not name-calling, insults, or lies.  We have recently banned a handful posters not for disagreeing with an article, but for repeatedly engaging in name-calling, insults, demeaning and in some cases defamatory or racist remarks toward readers, posters, or our staff. We welcome diverse voices, provided readers remain civil and courteous.

than to trust anything that comes from the NYT, here's proof of their lies and deceitful headlines buried down in their own story. "Each time, he requested an extension to file his 1040; and each time, he made the required payment to the I.R.S. for income taxes he might owe — $1 million for 2016 and $4.2 million for 2017." "So the claim that Trump paid only $750 in Federal taxes in 2016 and 2017 is thus a complete and total lie which is easily disproven by the Times own story." Anyone looking for real truth in reporting can find the other half of the story over here - NYT's Hit Piece Includes Its Own Fact Check: Trump Paid $1 Million in 2016 and $4.2 Million in 2017 to US Treasury
Where is your headline about the Bidens hiding money thru S-Corps? The Bidens Used S Corps To Avoid Paying Hundreds of Thousands in Payroll Taxes Typical ECM only representing the views of the Left.

which they did release.  It is true however that they did legally reduce their liability with the S-Corps.

The bigger concern with Trump's tax issues, however, is not the amount he paid, but rather to whom does he owe nearly a half billion dollars in debt coming due.

I read the story. It's paywalled but worth the cost of admission.