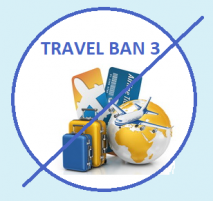 October 17, 2017 (El Cajon) - Hawaii’s request to temporarily block President Donald Trump’s third version of a travel ban was granted by a federal judge a day before it was set to go into effect.

In the ruling, Derrick Watson says that the third version of this executive order “suffers from precisely the same maladies as its predecessor: it lacks sufficient findings that the entry of more than 150 million nationals from six specified countries would be ‘detrimental to the interests of the United States.’”  Thus, he granted plaintiffs’ motion for a temporary restraining order.

Trump’s executive order had set different rules for different countries. According to the Washington Post, for Syria and North Korea, the president’s proclamation blocked immigrants wanting to relocate to the United States and nonimmigrants wishing to visit. For Iran, the proclamation blocked both immigrants and nonimmigrants, but students and people participating in a cultural exchange. For Chad, Libya and Yemen, it blocked immigrants and those with business our tourist visas, and it barred Somalians from coming as immigrants. The Venezuela ban applied only to certain government officials.

Hawaii argued that this was Trump’s attempt to fulfill his campaign promise of a “total and complete shutdown of Muslims entering the United States.” In the challenge to the third version of the travel ban, Hawaii claims Trump “has never renounced or repudiated his calls for a ban on Muslim immigration.”

Justice Department spokesperson Ian Prior has promised a swift appeal in the interest of “national security.”

The ban is expected to work its way up to the Supreme Court, reports CNN.

Huckabee said in a statement, “These restrictions are vital to ensuring that foreign nations comply with the minimum security standards required for the integrity of our immigration system and the security of our Nation. We are therefore confident that the Judiciary will ultimately uphold the President’s lawful and necessary action and swiftly restore its vital protections for the safety of the American people.”

But Hawaii Attorney General Doug Chin states, "This is the third time Hawaii has gone to court to stop President Trump from issuing a travel ban that discriminates against people based on their nation of origin or religion… Today is another victory for the rule of law."