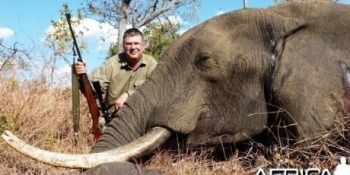 The Council is specifically tasked with eliminating or reducing limits on hunting and importing endangered species.  Recently, Trump acted on the Council’s recommendation and overturned a ban on importing elephant and lion trophies such as ivory tusks or heads from animals killed by trophy hunters.

The Council’s members include members of a hunting club that includes Dr. Walter Palmer, a dentist made infamous on the internet for killing Cecil the lion, a beloved lion at a national park in Zimbabwe.

Masha Kalinina, international trade policy specialist for the Humane Society International calls the Council “embarrassing,” noting that the council does not include any legitimate representatives of the conservation community with scientific credentials and a record of successful conservation programs, nor are there any wildlife law enforcement experts or biologists not profiting off trophy hunting.

Yes, I have my opinions regarding Trump and his administration, even his family members. I will continue exposing anyone who acts in such aberrant ways, particularly when those actions jeopardize the health and welfare of U.S. citizens. Some people may be loyally blind to what's happening, I'm not. I read many news articles, as well as watch local and world news to garner the FACTS as presented to the public. I'm not affiliated with a particular party and my opinions are based upon such facts as presented for everyone to read - if they choose to do so. Trump it seems, has many blind, loyal followers no matter what he says or does. It's quite baffling really. I want a president who acts like a mature adult instead of an impudent child. Someone who can be professional at ALL times. A person in touch with every citizen, not just the wealthy and special interest groups. A humanitarian who empathizes with others at their level because he or she has experienced life in a similar way. One who willingly takes responsibility for his actions instead of blaming someone else or denying the obvious and factual accounts. Not an arrogant, self centered, egotistical wanker, who thinks of himself first and others as an afterthought. I hope our next POTUS is completely dissimilar to the current buffoon we have in office. Don't be a Troll.

"The International Union for Conservation of Nature, an internationally recognized organization that sets the conservation statuses for species, supports this idea. “Well-managed trophy hunting can provide both revenue and incentives for people to conserve and restore wild populations, maintain areas of land for conservation, and protect wildlife from poaching,” its guiding principles say." link is below

People can have opinions and disagree, but the anti Trump sickness is obvious and destroys the credibility of, and casts doubt upon the sanity of those involved.

We're not talking about trophy hunting of deer, elk, impala, etc. or other animals that are plentiful.

No credible biologists or conservationists support trophy hunting of endangered species such as elephants, lions, rhinos and giraffes.

Polls have also shown that Americans overwhelmingly find trophy hunting objectionable, killing animals not for food, but purely for a lust for killing.

Also the term "anti-Trump sickness" is offensive and misleading. There are many legitimate reasons for people to oppose Trump or his actions, and those reasons are quite rational.

No doubt these are more Trump supporters / lackeys / campaign contributors. What will we witness next, Trump on an African hunting safari killing an endangered animal and gloating about what a great hunter he is? WHITE HUNTER, BLACK HEART (MOVIE)