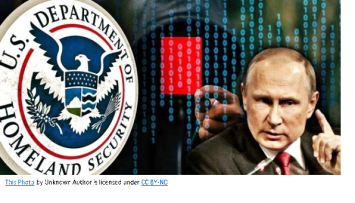 Homeland Security Secretary Kirstjen Nielsen, prior to resigning, grew increasingly concerned about Russia’s continued activity in the U.S. during the 2018 midterm elections including hacking, rerouting internet traffic, fomenting division on social media, and infiltrating power grids, the New York Times reports. She pledged to make preventing Russian interference in the 2020 presidential election one of her highest priorities to protect America’s national security.

But when Sec. Nielsen tried repeatedly to discuss her concerns with President Trump, his chief of staff Mick Mulvaney demanded that she not bring up the subject with the President because Trump viewed any discussion of Russian election interference as questioning his legitimacy as President.

Trump may well have benefitted from Russian meddling. Whether he would have won without it is anybody’s guess, and arguably former President Barack Obama’s administration should have reacted more forcefully to curb Russian hacks. But as current President, only Trump has the power to make it a federal priority now to stop Russia’s efforts – and Trump has shown zero interest in preventing Russian interference in future elections – and his administration has actively thwarted any such efforts.

Among other things, Russian operatives hacked into at least 22 states’ election systems, accessing voter databases. Russia also hacked the Democratic National Committee (DNC) office and the emails of Trump’s rival, Hillary Clinton, then met with Trump campaign leaders offering to turn over the stolen emails obtained through the cyber-equivalent of the Watergate break-in during the Nixon era.

The New York Times reports, “Ms. Nielsen grew so frustrated with White House reluctance to convene top-level officials to come up with a governmentwide strategy that she twice pulled together her own meetings of cabinet secretaries and agency heads. They included top Justice Department, F.B.I. and intelligence officials to chart a path forward, many of whom later periodically issued public warnings about indicators that Russia was both looking for new ways to interfere and experimenting with techniques in Ukraine and Europe. One senior official described homeland security officials as adamant that the United States government needed to significantly step up its efforts to urge the American public and companies to block foreign influence campaigns. But the department was stymied by the White House’s refusal to discuss it…”

Congress, after the 2016 Russian cyber-attacks, allocated $60 million to prevent future Russian attacks. But then-Secretary of State Rex Tillerson took seven months to ask for the funds—and when he finally submitted his request, it was denied. As of last year, none of that $60 million had been spent, Newsweek reported.

What power does Congress have to address these concerns?

Impeachment is one possible action given the obstruction of justice evidence laid out in Mueller’s report. Mueller did not recommend indictment because the Justice Dept. rules specifically prohibit indicting a president for any crime unless Congress has first impeached. But even if Democrats were to impeach, a conviction in a Republican controlled Senate appears unlikely, and Democrats may opt against a politically divisive action with the 2018 primaries drawing near.

In an editorial published in the New York Times, former Secretary of State Hillary Clinton, Trump’s political rival in the 2016 election, noted that after 9/11, Congress established an independent, bipartisan commission to recommend steps to guard against future attacks.  She calls for establishment of a similar commission to help protect the integrity of our elections now, because she concludes, “the President of the United States has proved himself unwilling to defend our nation from a clear and present danger.”

But even if such a commission were convened and issued strong recommendations, it is unclear how a recalcitrant President could be forced to implement those recommendations, leaving the U.S. once again vulnerable to hacking and other illegal electoral actions by Russia or potentially other foreign powers.

Since this is Miriam's online news source, I believe she has every right to exert control in what words we use to comment on articles and even ban a few, but more importantly - how we treat one another. I too have been attacked for no reason that I know of, other than what I think is that certain people appear to get a kick out of agitating others that they either disagree with, or simply wish to start a conflict. I have been reprimanded for fighting back toward hostile opponents, so have learned for the most part to remain civil and respect her news site.
Your headline is nothing but propaganda, the voting majority in this country no longer trust the NYT and their so-called "Anonymous Sources" and rightfully so. People are on to their tricks, as we're on to yours. Anonymous Sources = FAKE NEWS!

These are the first results that came up in Google. All of them are  about Nielsen being barred from talking to Trump on this issue.  Even the Washington Examiner, a conservative site has a similar headlne and apparently believed the Times to be credible.  We are in line with the mainstream media.  I have not seen Nielsen denying this, either.

Report: Mulvaney told Nielsen not to elevate concerns about future ...

https://www.nbcnews.com/...trump/report-mulvaney-told-nielsen-not-elevate-concerns...
3 days ago - Trump still equated talk of Russian meddling with the legitimacy of his own ... Nielsen earlier this year that any conversations about Russian ...

Nielsen was warned not to talk to Trump about new Russian election ...

https://thehill.com/.../440354-nielsen-was-warned-not-to-talk-to-trump-about-new-rus...
3 days ago - Former Homeland Security Secretary Kirstjen Nielsen was warned not to brief President Trump on possible Russian interference in the 2020 ...

'Like pulling teeth' to get White House to focus on Russian election ...

Kirstjen Nielsen Was Instructed Not to Talk to Trump About Russia ...

https://www.motherjones.com/.../kirstjen-nielsen-was-instructed-to-not-discuss-2020-e...
3 days ago - When former Department of Homeland Security Secretary Kirstjen Nielsen began to prepare a plan to address potential Russian interference in ...

https://www.nytimes.com/2019/04/24/us/politics/russia-2020-election-trump.html
3 days ago - ... Kirstjen Nielsen became increasingly worried about Russian ... President Trump's chief of staff told her not to bring it up in front of the ...

Mulvaney warned Kirstjen Nielsen not to tell Trump about Russian ...

https://www.businessinsider.com/mulvaney-kirstjen-nielsen-trump-russia-interference-...
Former Homeland Security chief Kirstjen Nielsen was worried about Russia meddling in the 2020 election, but was reportedly warned not to bring the issue up to ...

https://www.washingtonexaminer.com/.../mick-mulvaney-told-kirstjen-nielsen-dont-br...
Mick Mulvaney told Kirstjen Nielsen: Don't bring up 2020 Russian election interference to Trump. by Caitlin Yilek. | April 24, 2019 10:18 AM. Print this article.
ALSO OF NOTE:  Our discussion of Trump blocking any action to stop Russian hacking of our elections did NOT rely solely on the NY Times article or Nielsen's issues.  The President has defied Congress, refusing his cabinet director's requests to spend the money Congress allocated specifically to combat Russian hacking, and has refused to listen to other top security experts all voicing concern about this issue.
For future comments on this particularly article, please stay on focus.   If you don't care that the door has been wide open for Russian hacking, please explain why.  This is not about whether or not Trump knew about the earlier hacks. Let's assume for the sake of argument that he didn't.  Do you believe action should be taken now?  If not, why don't you care that a foreign government may be influencing the election of the next president. Shouldn't that be up to voters, regardless of which candidate they choose?
I hate to be the one to point out the fact that every single one of the examples above refer back to the same NYT article any their "anonymous sources". I'm with you JDinSD, it seems conservative viewpoints are not welcome on this site.

This was reaching the point of bullying and he'd been warned a time or two.  He also persisted despite being advised I am battling pneumonia and focusing on trying to cover major stories like the mass shooting at the synagogue today, not have to waste time responding to endless attacks that distorted many things.

Respectful disagreement on issues is fine and if there are areas where we can improve our coverage we are always glad to listen.

We have of course run editorials from conservative views as well,  and other points of view, as long as they are factually accurate.

When the Homeland Security Director and other high level security officials do interviews with not just the NYT but various other major media,  those are not anonymous sources.  But if you continue to call us fake news we will ban your account as I am tired of wasting time repeating the same things only to be insulted.  Right now I'm trying to focus on reporting on the mass shooting today at a synagogue, all while I am getting over pneumonia.  I am out of patience with your libelous remarks.

Your headline, "Homeland Security Secretary resigned after White House thwarted her efforts to prevent Russian hacking" implies that this statement is a fact, when you actually have no idea if its true or not. Mrs Nielsen has never publicly made any such statements to that fact and actually quite to the contrary. This is the exact kind of disinformation that was propagated by every MSM outlet regarding Russian Collusion for the past 3 years. I fully expect this to end up the same. Instead of threatening to silence your opposition because you don't agree with my position, defend your own with facts, and lets have a legitimate debate. I've violated no rules here and I keep my comments civil, all I'm asking for is equal representation on this site and the acknowledgment that currently, it does not exist. If you're not feeling well, we can pick this up another day, I have lots of patience. Hope you feel better.
So, this is what "Badgering" looks like. Seems more to me that someone doesn't like hearing the truth. Shameful, not a true representation of East County in the slightest bit.

We want our comments to stay on topic. In this case, what should be done to stop Russian hacking of the next eelection and why isn't the president doing anything about it?  He has refused to allow his cabinet officials to spend the money Congress allocated and has ignored advice from multiple top security experts. There's a lot evidence of this than just the Nielsen concerns,and other sources beyond the Times.  One can be a conservative or a liberal and still stand up for the US when our national security interests are threatened, questioning the decisions of those in power.  It is unpatriotic to turn a blind eye to Russian hacking which was proven that it occurred beyond a doubt in the Congressoinal testimony (which I watched in part), the evidence provided by the 22 state election officials where voting systems were hacked, and the Mueller report.  Even if the president did NOT know about it in advance, every American should want steps taken to prevent a foreign government from tampering with the integrity of our elections.

So please stay on comment folks and focus on that, not other issues which can be addressed in articles on other topics.

of words in "hoopla" in describing the reaction to the Mueller report. A few weeks ago it was your silver bullet, today you dismiss it as "an unnecessary fuss" Love it, keep it up. ;)
"FAKE NEWS"! is the usual outburst...