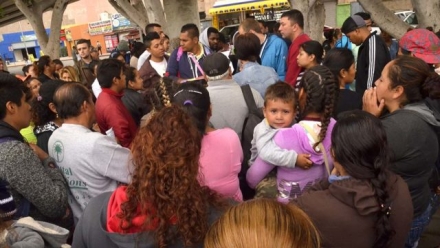 May 21, 2019 (San Diego)--With detention facilities in Texas overflowing with some 8,000 migrants seeking asylum in the U.S., the Trump administration has begun shipping migrants to San Diego.  Three flights a week, each carrying 120 to 135 migrants, will be arriving in San Diego, where they will be processed by U.S. Customs and Immigration officials. The first plane load has arrived, with flights slated to continue indefinitely.

These immigrants will undergo medical screening and vetting to determine whether to keep them in custody or release them into the community while awaiting asylum hearings. In the case of families, most will be released with ankle bracelets to avoid extended detention of children. If any parents are found to be imposters traveling with children, those youngsters will be separated and sent to facilities for unaccompanied minors, Governing.com reports, quoting interim Chief Patrol Agent Douglas Harrison in San Diego.

The San Diego Rapid Response Network runs a migrant shelter in downtown San Diego, with funding and support from state and local officials in recent months to assist immigrants who lack a support network. Gov. Gavin Newsom provided $5 million for migrant relief efforts at the border shortly after entering office in January to help fund groups like the SDRRN.

County leaders and San Diego Mayor Kevin Faulconer are calliing on federal government for resources to help cope with the influx. Supervisor Dianne Jacob said in an email she was "deeply concerned" that the additional migrants flown to San Diego would put an even greater strain on local nonprofits and taxpayers, KQED reports.

"Immigration is clearly the responsibility of the federal government, but now it's sticking San Diego County with the bill," Jacob said. "Since the opening of an emergency shelter downtown in October, the county has had to spend nearly $2 million to screen and process some 14,000 asylum seekers. Local taxpayers should not be on the hook for this."

Supervisor Nathan Fletcher faults the Trump administration for creating a manufuctured crisis for our region but takes a compassion approach. “My office has coordinated with our Health and Human Services Agency and The Rapid Response Network; we are ready to do everything we can to help families being flown to San Diego We stand ready to help immigrants and protect the public’s health,” Fletcher says, Times of San Diego reports.

Nearly 19,000 more asylum seekers from Central America are now stuck in Mexican border cities waiting to be processed as the Trump administration seeks to limit immigration, according to Times of San Diego.

That’s the major finding of a new report prepared by the University of California San Diego’s School of Global Policy and Strategy’s Center for U.S.-Mexican Studies and by  the University of Texas at Austin’s Robert Strauss Center.

In a process known as “metering,” Customs and Border Protection officials tell arriving asylum seekers that U.S. ports are full and that they need to wait their turn in Mexico, while at the same time accepting limited numbers of asylum seekers daily for processing.

In response to the growing number of asylum seekers in border cities, Mexican authorities created informal waiting lists, and the number has grown by 14,000 in the past three months.

Savitri Arvey, a UCSD graduate student and researcher at the Center for U.S.- Mexican Studies, says, ““We found that migrant shelters across the entire border are over capacity, and asylum seekers have begun arriving in smaller cities without the infrastructure to receive them. This has left thousands of asylum seekers to rent hotel rooms or even sleep on the streets, increasing their vulnerability for predation by organized crime or other opportunistic actors.”

Tijuana and Mexicali, Mexican communities just across the border from San Diego and Imperial County, have among the longest waiting lists.

The U.S. has come under increasing criticism domestically and internationally for its treatment of asylum seekers from Central America following recent news stories that the federal government has lost track of thousands of children in its custody. Despite a court order to reunite separated families, many remain unaccounted for.

Five immigrant children in U.S. detention facilities have died, including a 2-year-old last week and a 16-year-old Guatemalan boy this week. Business Insider reports that children have been kept in freezing cold, unsanitary conditions with inadequate food.

Really? Are you kidding me? Why are they so upset? After all he's sending them to SANCTUARY CITIES. Y'know, the cities where they actually made it OK for illegal immigrants to stay without fear of being deported, which actually violates U.S law by the way. If y'all love those illegal immigrants so much why y'all getting bent out of shape now that the President is sending them to you?
https://www.sos.ca.gov/elections/voting/-resources/voting-california/who-can-vote-california
"Gov. Gavin Newsom provided $5 million for migrant relief efforts" and Fletcher has open arms. These two spend our tax dollars as if it were nothing. "illegal aliens" are in my house and I strongly object to paying for them in any way. It has been proven that "asylum" is the ticket and excuse for their support for "open borders" and statewide asylum sanctuaries. You can shed tears for "illegals" but they don't belong in "my house"! Democrats in Congress want their votes.

we've added more of his quote to show that.

...did say that he was going to start shipping these desperate folks to California because governors Brown & Newsom have defied him and remained a sanctuary state - if I recall correctly.

But even by that standard, there are quite a few sanctuary states and cities across the nation. Why only San Diego and, we're now hearing, Imperial County which is a poverty-stricken area in the desert? In the past federal authorities tried not to over-burden any one jurisdiction, but rather distribute waves of immigrants across multiple places.

Why are you trying to find a reason to distribute waves of immigrants in America, rather than the one reason to stop this invasion? Our laws are for our country and I am not responsible to accommodate, feed, house, provide medical, anyone that trespasses and breaks them!