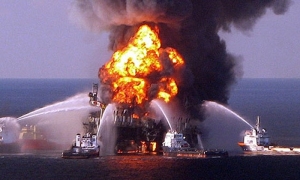 January 10, 2018 (Washington D.C.) – Just days after Trump’s Secretary of the Interior Ryan Zinke announced plans to open up 98% of our nation’s coastlines to offshore oil drilling and fracking, Zinke said he is removing Florida off that list, stating, “I support the governor’s position that Florida is unique and its coasts are heavily reliant on tourism as an economic driver.”

Several states’ governors had objected to having oil drilling and gas exploration off their coasts, including Jerry Brown, Governor of California, where the economy is also dependent on tourism.

Are the Trump administration’s actions partisan?  Or perhaps does the President have a conflict of interest?

Trump’s Mar Lago resort is located on the Florida coastline.  The announcement to withdraw Florida from consideration for offshore drilling comes right after liberal activist and media personality Michael Moore tweeted, “Our fracking off the coast of Mar-a-Lago begins right after Labor Day. I’ve already got the rig — a beautiful Halliburton G-0008 fracking system with a monster Caterpillar engine!”  Moore accompanied his tweet with an image of a red fracking rig, adding, “The oil we drill just off your beach will pay 4 our entire show! And any spills - we’re going to let the ppl of Florida keep whatever they collect 4 free!”

Trump has said he wanted to open up virtually all of the shorelines off the East and West Coasts, as well as the Gulf Coast and Alaska, to drilling and fracking in order to help make America energy independent.

But according to the U.S. Energy Information Administration, as of 2016, domestic energy production already supplies 88% of America’s energy consumed.  With increased reliance on renewable energy sources such as wind and solar, the nation was already on track to diminish or eliminate its need for foreign oil, even without opening up nearly all of the nation’s coastlines to oil drilling, an action that could have devastating consequences should a major oil spill occur.