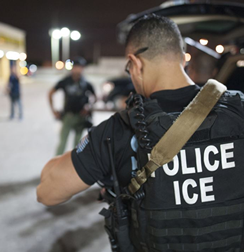 January 17, 2018 (Washington D.C.) – Leaders of sanctuary cities and states could be arrested and charged with crimes, Kirstjen Nielsen, Secretary of Homeland Security told Senators in a committee meeting Tuesday.

Nielsen indicated charges may be filed against officials who implement or enforce laws or policies that prohibit jurisdictions from cooperating with immigration authorities. Earlier this month, Thomas Homan, acting director of Immigration and Customs Enforcement, also called for local and state elected officials to be charged with federal crimes for following sanctuary policies aimed at shielding undocumented immigrants.

It is unclear precisely how “sanctuary” cities or states would be defined, and jurisdictions’ policies vary widely.  Nor is it clear how widely a dragnet could be cast.  If California is targeted, could the Governor, department heads, or even state legislators who voted for sanctuary bills be imprisoned? What about University of California officials, local school districts, or mayors of some local cities?

But some legal experts say such action by the Trump administration would itself be illegal.

Cecilia Wang, deputy legal director for the American Civil Liberties Union, called the announcements “troubling intimidation tactics.”  In an interview with Newsweek, the ACLU attorney added that threatening to prosecute officials who have spoken out against the administration’s harsh immigration enforcement policies, “I think you’ve got a serious First Amendment problem.” She added: “The Constitution doesn’t let the federal government force state and local officials to do the president’s bidding in this way."

Some of the Trump administration actions have faced legal challenges of their own. Notably, a federal judge late last year blocked an executive order by President Donald Trump that would have stripped sanctuary cities of local funding.

California Senator Kamala Harris, who questioned the Homeland Security Secretary in the Senate hearing on the agency’s operations, issued a statement through her press secretary, Tyrone Gayle, stating that the Democratic Senator is “deeply disturbed to hear that this Administration is actively looking for ways to prosecute California elected officials who have passed laws to protect public safety and combat the damaging effects of this Administration’s immigration enforcement policies.”

Does anyone wonder how Donald Trump ever became President of the United States? Who would've thought, right? I hope there's a better qualifier next election and we should pray that Trump doesn't lead this country too far down the rabbit hole.

hillary is not president