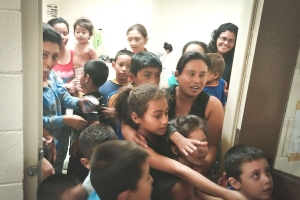 December 20,2018 (San Diego) – Homeland Security Secretary Kirstjen Nielsen today announced that Central American migrants seeking asylum in the U.S. must wait in Mexico until their hearing dates, except for unaccompanied minors. But the action is likely to be challenged in court—and thus far, federal courts have consistently ruled against the Trump administration efforts to restrict the rights of asylum seekers.

Amnesty International’s executive director, Margaret Huang, called the policy “a stark violation of international law” that could subject migrants in Mexico to exploitation, sexual assault, or murder in Mexico.

Mexico’s new president Andres Manuel Lopez Obrador has indicated his country will allow asylum seekers to await their hearings in Mexico, but that anyone rejected for asylum must be deported back to their countries of origin.

Obrador has also pressed the Trump administration to invest $20 billion to help address problems in Central America that have resulted in the mass migration of people largely fleeing violence by drug cartels.

On Tuesday, the U.S. State Department announced that the U.S. will allot $5.8 billion, about a quarter of the sum requested,  to support economic development in Honduras, Guatemala and El Salvador.

Last Wednesday, a federal judge in Washington D.C. ruled against the Trump administration’s ban on granting asylum to victims of domestic violence and gang violence.  Later that day, a San Francisco federal court issued a preliminary injunction to block Trump’s executive order that would have prohibited migrants who cross the border between ports of entry from requesting asylum. International law provides that immigrants may ask for asylum regardless of where they came across an international boundary.

If the Trump administration effort to force migrants to await asylum hearings in Mexico is upheld by the courts, problems remain to be resolved, such as assuring asylum seekers have access to counsel and notification of when their cases are to be heard.  Homeland Security has indicated that it plans to build courtrooms in San Diego with video conference abilities.

Public health is another concern. While Mexico has provided an indoor shelter for some migrants including children, many healthy adults still remain unsheltered amid winter weather and the recent rains.

Before today’s announcement, immigrant officials were dumping off migrant families on the streets of San Diego with no resources whatsoever.

State Senator Toni Atkins (D-San Diego) has raised concerns over the potential for a public health crisis similar to the hepatitis epidemic last year that began among the homeless on San Diego’s streets.

“I am watching with growing concern as thousands of migrants are released into the San Diego community in the middle of the night without so much as a meal to sustain them for one evening,” Atkins said.

She noted that the consequences of inaction can be dire — citing the deaths of 20 people and the infection of hundreds of others with hepatitis A. She accused the federal government of abandoning its responsibilities, adding, “We can and must do better than this.”