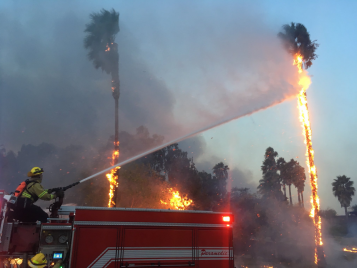 January 3, 2018 (San Diego) – President Donald Trump on Tuesday approved a request by California Governor Jerry Brown for a federal disaster declaration due to wildfires in southern California that began December 4th, including the Lilac Fire in San Diego as well as devastating fires in Los Angeles, Ventura and Santa Barbara counties.

California Senators Kamala Harris and Dianne Feinstein sent Trump a letter calling the wildfire season in California “catastrophic,” noting that over 1.2 million acres have burned in the state this year. Since early December, six large wildfires have burned nearly 300,000 acres in Southern California and killed two people, including Cal Fire engineer Cory Iverson of San Diego, who lost his life in the Thomas Fire.

Governor Brown has said that the recent fires destroyed over a thousand homes. In San Diego County, the Lilac Fire burned 4,100 acres in North County and destroyed over 200 buildings, also claiming the lives of dozens of horses.

The Governor’s office indicates the federal aid will help with debris removal to eliminate the threat to public health and safety, and enable future rebuilding.

The Governor also requested FEMA disaster relief to help with housing and temporary shelters, unemployment assistant, and other services for fire survivors, though it is unclear whether all of those actions are included in the federal declaration.

Governor Brown is almost invisible. No big ego or BS, he takes care of the business of our state, the seventh largest economy in the world.