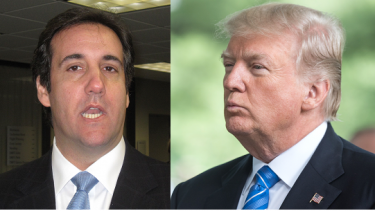 December 12, 2018 (Washington D.C) – President Donald Trump’s former attorney, Michael Cohen, was sentenced today to three years in prison after pleading guilty to crimes and admitting to prosecutors that Trump ordered him to commit felony crimes regarding payoffs to hide affairs. Cohen further provided evidence that the President was actively negotiating with Russia on business dealings during the campaign, contrary to what the president told voters at the time, the New York Times reports.

Cohen pled guilty to crimes filed under two separate cases, one filed by U.S. Justice Department prosecutors in New York and the other by Special Prosecutor Robert Mueller.

While Mueller recommended leniency for Cohen due to his cooperation with the probe into illegal election interference,  federal prosecutors in New York indicated Cohen was uncooperative in their investigations. Investigators also seized computer and other records of Cohen.

In court, Cohen said of Trump, “I felt it was my duty to cover up his dirty deeds.” He apologized to the American people and said his loyalty to Trump “led me to choose a path of darkness over light.”

In Mueller’s case, Cohen pled guilty to lying to Congress about negotiations to build a Trump Tower in Moscow and about Trump’s involvement during the campaign.  Trump at the time lied, stating he had no business dealings with Russia. But in fact, he was actively negotiation to build Trump Tower at the time and according to some accounts, even offered a $50 million penthouse suite to Russian president Vladimir Putin.  That could be viewed as a bribe offered to a foreign official, a felony for any American corporation, business executive or politician to do, whether or not such payment was ever made.  (The tower was never built.) 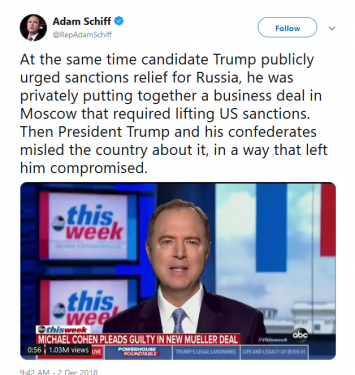 Congressman Adam Schiff (D-New York), the likely next chair of the House Intelligence Committee, has indicated that the proposed Trump-Putin business deal may also have swayed U.S. policy toward sanctioning Russia for its actions in Crimea.

Schiff recently tweeted, “At the same time candidate Trump publicly urged sanctions relief for Russia, he was privately putting together a business deal in Moscow that required lifting US sanctions. Then President Trump and his confederates misled the country about it, in a way that left him compromised.”

Mueller’s team indicated Cohen also provided “credible” information on multiple contacts between numerous campaign officials and Russians related to influencing the outcome of the election. Today, the Special Counsel's office issued a statement further confirming that Michael Cohen “has provided our office with credible and reliable information about core Russia-related issues under investigation and within the purview of the Special Counsel's Office.”

Trump and his team have denounced Cohen as “weak” and a liar.   Trump’s story changed repeatedly regarding the pay-offs. He first denied knowledge, but later admitted he knew of the hush money payments.  More recently he has argued that these should be considered personal expenses, not campaign expenses as the government contends, and that these are not crimes.

However the actions are virtually identical to the crimes with which John Edwards, a former Democratic candidate who paid off a pregnant mistress to keep the affair silent during his presidential campaign, was charged.

Cohen pled guilty to crimes including lying to Congress, campaign finance violations, and tax evasion. He must also pay $1.5 million in restitution, in addition to serving three years in prison.

In a related case, American Media, publisher of the National Enquirer, admitted that it, too, committed a felony by paying $150,000 to buy but not publish the story of Playboy model McDougal “in order to ensure that the woman did not publicize damaging allegations about the candidate before the 2016 presidential election.” The U.S. Attorney’s office announced today that it will not prosecute American Media in exchange for the company’s cooperation in the case.

Also this week, the Washington Post reported that Maria Butina is set to plead guilty to serving as a Kremlin agent in order to infiltrate the conservative movement in the United States including the National Rifle Association and meetings with wealthy GOP donors and political campaign operatives. She also set up a meeting between a top Russian emissary and Donald Trump, Jr., Trump’s son.

In a related twist, Mueller has issued a court filing indicating that Trump campaign manager Paul Manafort breached his plea deal by lying to the special prosecutor’s team after pleading guilty of conspiracy against the U.S. and attempted witness tampering, CNN reported in late November. The Hill reports that Manafort allegedly lied about five key areas:  Manafort's contacts with Trump administration officials; his interactions with an associate who has suspected ties to Russian intelligence; the associate's role in tampering with witnesses; a $125,000 payment made to a firm working for Manafort; and information he provided related to another Justice Department investigation.

Revelations that prosecutors believe the President committed at least one felony during his campaign, and possibly additional crimes such as obstruction of justice or potentially even conspiracy with a foreign government to influence an election outcomes, have prompted debates among legal scholars over whether a sitting president can be indicted while in office. Experts disagree on that point, but generally agree that charges could be filed once Trump leaves office if the statue of limitations has not run.

Trump could also be held accountable through impeachment by the House of Representatives in Congress, a possibility once Democrats take office in January. But it would take a two-thirds majority of Senators to remove the president from office – a prospect that would require a significant number of Republican Senators to vote for removal.

Another prospect would be a behind-the-scenes effort by Republicans, as occurred during the Watergate scandal. When presented with evidence of Nixon’s complicity in a coverup of crimes and obstruction of justice, Republican leaders pressured Nixon to resign rather than face the scandal of impeachment.

Significantly, a bipartisan coalition of 45 former U.S. Senators published a letter in the Washington Post which noted that the Mueller investigation will soon wind up and House investigations commence.

The prominent former Republican and Democratic Senators wrote, “At other critical moments in our history, when constitutional crises have threatened our foundations, it has been the Senate that has stood in defense of our democracy. Today is once again such a time. Regardless of party affiliation, ideological leanings or geography, as former members of this great body, we urge current and future senators to be steadfast and zealous guardians of our democracy by ensuring that partisanship or self-interest not replace national interest.”

...even if he is charged and convicted of something, like a misdemeanor crime. I'm still waiting to see a copy of his tax returns that he promised to reveal while campaigning against Hillary. She let the public see hers, so why is he still unwilling to do the same? What is he hiding? What will they reveal? Interesting how he bashes and belittles everyone else about lying, yet it's becoming quite clear he's the actual source. Typical narcissist deflection of the truth tactic.