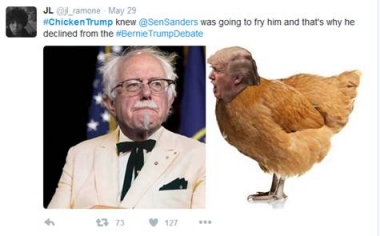 May 30, 2016 (San Diego) -- After Hillary Clinton backed out of debating Bernie Sanders in California,  late night comedy host Jimmy Kimmel asked Donald Trump if he would debate Sanders.  Trump said he would – provided $10 million could be raised for a charity.

Sanders promptly tweeted “Game on,” agreeing to the debate. But a day later, Trump’s campaign claimed that he was only joking. Trump now says he doesn’t want to debate a second place finisher, though the Democratic primary is not yet over.

However some high tech industry representatives have come forward to say that they would donate the $10 million that Trump demanded for a worthy charity, but so far the Trump campaign has ignored the growing cry for a Sanders-Trump debate, prompting a new Twitter feed with the hashtag  #Chicken Trump. 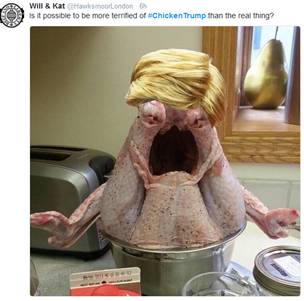 Sanders has said he hopes Trump will change his mind as he has on many other issues. Calling Trump a ”big tough guy,” Sanders asks, “Well, Mr. Trump, what are you afraid of? Why do you not want to see a debate here in California and obviously all across this country?”