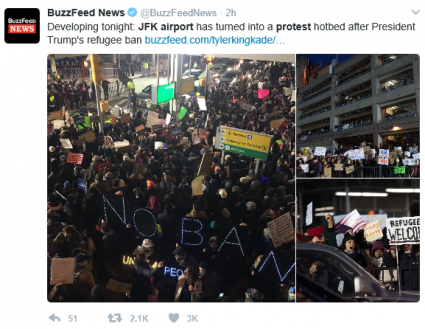 Photo: A large crowd at JFK airport in New York is protesting the crackdown on refugees and immigrants tonight, where cab drivers have threatened to shut down airport traffic for an hour.  A smaller group of protestors has gathered at San Diego's Lindbergh Field airport,  CBS reports.

Despite banning refugees from Syria, Trump backed off his campaign pledge to establish a safe zone inside war-torn Syria for persecuted people.

The order also puts a half million legal residents of the U.S. who are traveling overseas in limbo, unable to return home, and slashes in half the number of refugees the U.S. will admit this year from all countries. 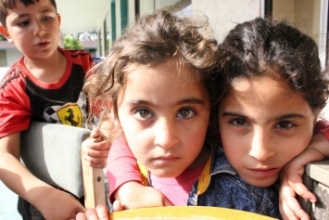 Over 11 million Syrians have fled their homes and 6 million are still trapped inside Syria, with no safe haven. Critics fear that they could face extermination.

Another 5 million are registered as refugees. The vast majority are children, women, and people with severe medical conditions in need of treatment.  San Diego has taken in more Syrian refugees than any other U.S. city, including the children pictured at right.

Refugees traveling to the U.S. today,  after having their refugee applicants granted, were turned away at airports, including unaccompanied minors traveling from refugee camps to live with foster families in America. Now many are stranded internationally, with no legal place to go.

The International Rescue Committee calls the action “harmful and hasty.”

Trump excludes Muslim nations where he does business, despite terror ties

Although the purpose of the “Protection of the Nation from Foreign Terrorist Entry Into the United States” order is to keep out “radical Islamic terrorists” according to Trump, the ban omits four nations with ties to terrorism where  Trump has business interests including hotels and golf courses: Saudi Arabia, Turkey, the United Arab Emirates and Azerbaijan are all excluded from the order, Bloomberg News reports.

Fifteen of the 19 terrorist  911 hijackers were Saudis and prominent Saudis have long been funding terror groups such as Al Qaeda. A diplomatic cable from U.S. Secretary of State Hillary Clinton in 2009 stated, “Donors in Saudi Arabia constitute the most significant source of funding to Sunni terrorist groups worldwide,” the Independent newspaper in Britain reveals.

Trump states, “We only want to admit those into our country who will support our country and love deeply our people.”

The order does give the Dept. of Homeland Security leeway to prioritize refugee claims made by those claiming religious persecution –but only if the applicant seeking refugee status is  “minority religion in the individual’s country of nationality.”

The American Civil Liberties Union (ACLU) issued a statement calling the order “just a euphemism for discrimination against Muslims.”

Trump reinforced that view in an interview with Christian Broadcasting Network Friday. Asked he he would prioritize persecuted Christians from the Middle East for admission as refugees, he responded, “Yes.” Trump said it has been harder for Christians persecuted  and risking slaughter by ISIS to gain entry to the U.S. than for Muslims, which he called “very, very unfair…So we are going to help them.”

The Council on Islamic Relations has announced that it will file a lawsuit challenging the order.  The grou’s national litigation director, Lena Masri, says there is “no evidence that refugees, the most thoroughly vetted of all people entering our nation, are a threat to national security. This is an order that is based on bigotry, not reality.”

One group that could be helped by the order could be Iraqi Chaldean Christians.  San Diego County is home to more than 60,00 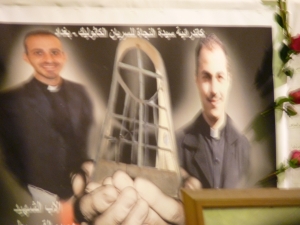 0 Chaldeans, many of whom fled persecution by ISIS.  (photo, right: priests beheaded on alter of a church in Baghdad; their images were displayed during a memorial service that included grieving family and friends in Spring Valley)

During the prior administration, some Iraqi asylum seekers trying to join family members in El Cajon were sent back overseas.

Potentially, other persecuted minority religious such as Yazidis might also be ultimately granted entry to the U.S.

Impacts on refugees from non-Muslim nations

That's an order sending ripples of fear across refugee communities in San Diego, which in recent years has admitted more refugees than any other city in America, with large populations of refugees from countries in Africa, Asia, and the Middle East.

Trump’s executive order is broad, with a temporary ban on all “aliens.”  That could also block a half million legal U.S. residents currently overseas from returning here, Pro Publica reports. That includes students visiting family, people on business trips overseas, and vacationers.

At JFK airport in New York, where some immigrants have been detained today, hundreds of protestors gathered outside chanting “Let them in.”

In addition, Trump canceled the Visa Interview Waiver Program, meaning repeat travelers to the U>S. must now undergo in person interviews each time they renew their visa.

Reactions to the order

Most Congressional Republicans dodged reporters’ questions on the executive order, though House Speaker House Ryan stated, “President Trump is right to make sure we are doing everything possible to know exactly who is entering our country,” the New York Times reports.

Scathing criticism emerged from many other quarters, even from some normally conservative Evangelical groups.  “Any limitation against any vulnerable population is to fly in the face of human dignity, of people made in the image of God,” said Scott Arbeiter, the president of World Relief, a charity affiliated with the National Association of Evangelicals.

Mark Hetfield, CEO of the Hebrew Immigrant Aid Society, called the timing of Trump’s order on Holocaust Remembrance Day “incredibly offensive.” “It was during the Holocaust that the world shamefully refused to give asylum to Jews and to others who were being murdered or about to be murdered in Nazi Germany.” All refugee resettlements in World War II were halted by the U.S. for four months from Europe and restrictions were also imposed on foreign nationals.

“Tears are running down the cheeks of the Statue of Liberty tonight as a grand tradition of America, welcoming immigrants, that has existed since America was founded has been stomped upon,” said Senate Minority Leader Chuck Schumer in a statement. He called the executive order “one of the most backward and nasty” ever issued by any president.

Former Secretary of State Madeleine Albright, who came with her family to the U.S. as a refugee fleeing persecution in Czechoslovakia, also denounced the action.  “When one faith is targeted, it puts us all at risk,” she said, CNN reports.

Congresswoman Susan Davis (D-San Diego) issued a statement which reads in part “This executive order slams the door on those seeking refuge from violence and oppression and runs contrary to the values that have defined America for generations. We already have one of the most stringent and thorough screening processing for vetting refugees, taking years to complete. The Muslim ban is a policy based on fear not strength. This executive order will simply reduce the stature and influence America will have globally.”

California Senator Dianne Feinstein, a Democrat, also voiced objection to singling out refugees based on their faith. “Let us recall the images of the body of Alan Kurdi, a 3-year-old Syrian boy, washed up on a beach and remember the staggering human toll of this crisis.  There is no legitimate national security reason to ban refugees,” added Feinstein, the ranking member on the Senate Intelligence Committee, “the vast majority of whom are women and children who have experience absolute horror.”  She also called it “shocking” that relatives in the countries targeted cannot visit family members in the U.S. “I very much regret that the president has chosen this dark path for our country,” she concluded.

obama was flooding the Republic with mohammedans. The law allows for time outs and stopping ALL incoming immigration. When ALL of the liberals especially dianne fienstein fill their houses with refugees when they can tel the rest of us