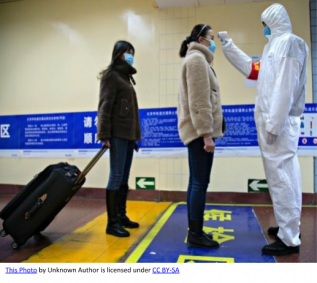 Update March 13: The President today declared a national emergency, freeing up some $50 bilion in federal aid for states.

The President has banned travel from most of Europe to the United States for the next 30 days, but only for foreign nationals, not U.S. citizens, provided Americans were screened for COVID-19 before entering the country.

Trump referred to COVID-19 as a “foreign virus.” While it is true that many cases here did originate from travelers overseas, the disease is also now being transmitted locally within the United States.

The ban does not apply to cargo, the president later clarified following a misstatement in his speech.

The action drew criticism from some Democrats. Congressman Don Beyer (D-VA), who is in self-quarantine after being exposed to a dining companion with the virus, tweeted, “We hae a pandemic with over a thousand coronavirus cases in the United States and counting. We don’t need walls and travel bans, we need TESTS,” referring to a shortage of test kits.

The President also proposed actions to lessen the devastating economic impacts of the virus on businesses and workers. The Dow Jones plunged over 1,400 points today into bear market territory. Nationwide, as major events are cancelled from NBA basketball games to concerts and business conferences. Many workers are going without pay due to being in self-quarantine, while many consumers stay home to lessen infection risk.  Fears of a global recession are growing as more and more are feeling the pinch.

Specifically in his speech tonight, the president proposed:

Paid sick leave:  Trump said he will ask Congress to provide emergency financial relief to workers who are quarantined or caring for others as a result of the coronavirus.

Defer tax payments:  The president indicated he will ask the Treasury Dept. to defer tax payments without interest or penalties beyond April 15 for certain negatively impacted businesses or individuals, but did not specify who would qualify.

Small business loans: The Small Business Administration will be instructed to provide capital and loans to businesses impacted by coronavirus, effective immediately, Trump said. He also plans to ask Congress to boost funds by $50 billion for this program, targeting businesses hardest hit.

Payroll taxes: Trump is also asking Congress for immediate payroll tax relief for Americans hurt by the COVID-19 crisis. However this idea met with bipartisan opposition.

Trump stated, “I will never hesitate to take any necessary steps to protect the lives, health and safety of the American people. I will always put the well-being of America first."

The President has drawn criticism for previously failing to fill vacancies on the U.S. panedemic team and for a delayed response to providing test kits and containment gear to protect medical first responders.  His administration has also been criticized for airlifting exposed passengers on a cruise ship out of a quarantine zone overseas and bringing to the U.S., a move which likely resulted in the first cases of COVID-19 here.

The World Health Organization earlier today declared a global pandemic, with more than 4,300 deaths worldwide to date, including 37 deaths  in the U.S.

While other affected countries have widespread COVID-19 testing, the US is testing only dozens, sometime hundreds, of people daily, a tiny fraction of the US's 327 million people. So we don't have a clue about how many are affected. Probably the test kits come from China? The CDC data is here. . . https://www.cdc.gov/coronavirus/2019-ncov/testing-in-us.html