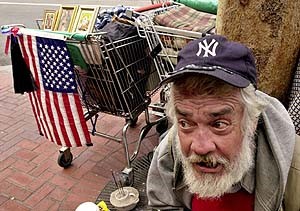 April 4, 2017 (San Diego) – One of the harshest cuts in President Donald Trump’s budget is his proposal to completely eliminate the U.S. interagency Council on Homelessness.  The Council helps all homeless people, but has been particularly effective helping homeless veterans. It has been successful in ending homelessness among veterans in three states and cutting veterans’ homeless nationwide by 47 percent. Associated Press reports.

The Council has an annual budget of only $3.5 million, a pittance compared to the massive amounts spent by the federal government on other items ranging from missions to Mars to added security for Melania Trump and the President’s Mar Lago retreat.

The Council coordinates efforts among numerous agencies to avoid duplication and assure that successful programs are replicated.

In San Diego County, the 2016 Point in Time Count found that homelessness among local veterans had decreased 16.2% since 2015 and 29.8% since 2011.  But as of last year, 573 veterans were still without shelter—a number that could soon rise if the President’s budget is approved by Congress.

cbs8.com, Mar 20: Around 2,500 units of housing for the homeless could come on line in San Diego over the next few years. . . Deacon Jim Vargas said Father Joe's Villages planned to added 2,000 housing units over the next five years. Vargas, the agency's president and CEO, said he estimates that 2,500 to 2,800 people could be helped. . . .the six points in the plan would cost an estimated $78.7 million over three years. . .here.