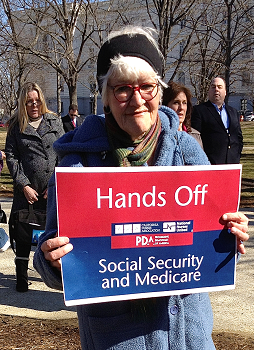 March 14, 2019 (Washington D.C.) – In direct contradiction to his campaign trail promises not to cut Social Security, Medicare or Medicaid, President Donald Trump has proposed a budget that would deeply slash all of these programs—programs which help the elderly, the poor and the disabled.

“I was the first & only potential GOP candidate to state there will be no cuts to Social Security, Medicare & Medicaid,” Trump tweeted on May 7, 2015, adding, “Huckabee copied me.”  He repeated that pledge in media interviews and at rallies.

His proposed new budget, however, would cut trillions of dollars from Medicaid and Medicare. Social Security would also be slashed by $25 million over the next 10 years, including whacking $10 billion from the Social Security Disability Insurance (SSDI) for people who are unable work.

The administration claims it will make up for these deep cuts in Social Security,Medicare and Medicaid programs by finding waste, fraud and abuse. But if not enough waste, fraud or abuse is found--and there have been years of efforts to do--benefits to recipients could be reduced reduced and some poor, disabled and elderly Americans might be denied medical or disability coverage completely.

As for Medicaid, Trump’s budget would require people to have jobs in order to receive the medical benefits, leaving millions potentially uninsured. Further, his budget calls for a fundamental change to the Medicaid program by shifting funds into block grants to states.  Medicaid was started in the 1960s War on Poverty and has always provided each state a share of funding for anyone who is eligible, the Washington Post reports. But with the block grants, money would not increase in proportion to the rising cost of medical care, which is much higher than the rate of inflation. That means the $1.5 trillion in Medicaid cuts over a decade would eventually squeeze recipients. States could also set their own rules on coverage for poor people.

Trump’s budget also asks Congress to slash $845 billion from Medicare, mostly by cutting payments to medical providers.  But already, many providers are refusing to accept Medicare patients because they say that reimbursement is too low, so this could make it harder for Medicare patients in some areas to find doctors.  The Federal of American Hospitals calls Trump’s proposed changes “devastating for seniors.”

The budget also calls for completely eliminating Medicaid expansion under the Affordable Care act, which dramatically reduced the number of uninsured American.

Trump’s Health and Human Services Secretary Alex Azar, a former pharmaceutical industry lobbyist, defends the President’s actions.  “This budget will help deliver on the President’s vision for a fiscally sustainable federal budget, a stronger economy, and a healthy America.”

But the budget also cuts key programs for research and treatment of some of the leading causes of death.  The National Institutes of Health would lose $4.5 billion, would the largest portion of those cuts made to the  National Cancer Institute.  Funds for the Centers for Disease Control and Prevention would drop by 10 percent, while funding for AIDS programs worldwide are also targeted for major cuts.

Short memories or under educated..........Government was established for "essential services" like police, fire, sewer & water, etc. All of the comments regarding needy, Affordable Care act, Social Security, Medicare, Medicaid, poor and disabled, etc. detract from the fact that 54% of Americans actually work, and 46% do not. We are here because of Social programs that are nothing more than handouts that accommodate lazy butts that are educated in free and handouts. That was not what America was founded on or for. President Trump is working to regain control of the budget, waste and principles that made us the best. Go back to school and learn and teach your children our culture & heritage.
"Know your adversary"

Congress hasn't passed a budget in twenty years so I guess you'll be right!

Don't you get tired of hearing yourself talk?

That May 2015 quote was before he announced his candidacy, so you'll need to come up with one of the other alledged statements.

https://www.whitehouse.gov/omb/budget & https://www.nytimes.com/2019/03/11/us/politics/trumps-budget-html & https://newyorker.com/news/our-columnists-the-white-houses-new-budget-exposes-donald-trumps-lies-about-protecting-medicare & https://www.theguardian.com/commentisfree/2019/feb/11/trump-offers-socialism-for-the-rich-capitalism-for-everyone-else The democrats who actually have a deeper understanding than Trump regarding how to run things have declared his proposed budget Dead On Arrival. Smart minds shall prevail. I'd hate to see the U.S.A. go bankrupt like some of Trumps businesses. I for one, am not following the Pied Piper.
A charlatan is running the country in my opinion. The budget Trump proposes is not "sustainable", nor does it promote a "healthy America". Reducing taxes for the very wealthy and corporations takes much needed dollars from the very programs that sustain the economy. Stripping billions of dollars from social programs which assist the needy and retired is ludacris! While diverting these funds (and much more) to areas he deems necessary, such as a more powerful military. We already have the strongest one in the world. Then of course his Space Force needs to be funded (I wonder what he's smoking) and more money for space exploration. Money that could be used to help U.S. citizens. People's needs should be prioritized. Beware, the Pied Piper is playing his flute for the lemmings...