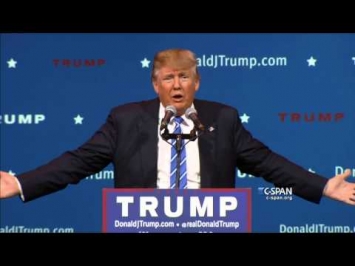 Reprinted with permission from The Moderate Voice, a member of the San Diego Online News Association

March 30, 2016 (San Diego) -- It’s common in the United States to call talk show hosts or DJs who try to be outrageous “shock jocks.” It’s abundantly clear now that Republican businessman and showman Donald Trump — who at this point seems to be the GOP’s likely nominee — is a shock politician. In yet another match thrown on the GOP’s post 2012 Presidential election “autopsy” that outlined things the party should do to win national elections, Trump now suggests there should be some form of punishment for women who abort.

No. Donald Trump is not a creation of The Onion or Mad Magazine — and he may soon be coming to an Oval Office near YEW:

Republican presidential front-runner Donald Trump walked back his statement that there would “have to be some form of punishment” for women who have abortions if the procedure were outlawed in the U.S.

The comment, which immediately riled abortion-rights supporters, came during a week where Trump is fighting to defend himself on women’s issues on multiple fronts ahead of a key primary in Wisconsin, and led his campaign to issue two clarifications on Wednesday afternoon.

“This issue is unclear and should be put back into the states for determination,” Trump said in a written statement e-mailed to Bloomberg Politics Wednesday afternoon. “Like Ronald Reagan, I am pro-life with exceptions, which I have outlined numerous times.”

As his initial remarks continued to draw scrutiny, Trump issued a second statement later in the day.

“If Congress were to pass legislation making abortion illegal and the federal courts upheld this legislation, or any state were permitted to ban abortion under state and federal law, the doctor or any other person performing this illegal act upon a woman would be held legally responsible, not the woman,” Trump said in the revised statement. “The woman is a victim in this case as is the life in her womb. My position has not changed – like Ronald Reagan, I am pro-life with exceptions.”

At a taping of an MSNBC town hall to be aired Wednesday evening, host Chris Matthews pressed Trump on his anti-abortion position, repeatedly asking him whether abortion should be punished if it is outlawed. “This is not something you can dodge.”

Trump’s second statement won’t work won’t work. The damage to him and the Republican Party (unless many GOPers distance themselves from it) is done.

It gives further ammunition to Democrats who contend the GOP is conducting a “war on women” — the suggestion that if abortion is illegal women who have them should be punished.

A Trump administration would be a busy one indeed — building walls to keep out Mexicans, deporting all illegal immigrants, preventing all Muslims from entering the United States, and making sure that if abortion rights are overturned by the Supreme Court that women who have them are prosecuted.

Look for Democrats to make full use of this in all their campaigns on all levels. It takes pro-life/pro-choice debates to a whole new level as Trump continues to define the face of the Republican Party for so many voters, in ways helpful to the GOP and not. This one isn’t helpful.