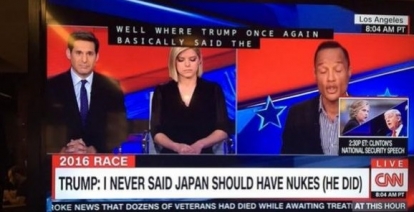 June 2, 2016 (San Diego) – In a speech on foreign policy today in San Diego,  former Secretary of State Hillary Clinton slammed her rival in the presidential campaign, Donald Trump for suggesting  that America should encourage Japan “to get nuclear weapons, and said this about a war between Japan and North Korea—and I quote, `If they do, they do. Good luck, enjoy yourself, folks.’  I wonder if he even realizes he’s talking about nuclear war.”

Trump, responding to a similar statement by Clinton in recent days, called her remarks “such lies about my foreign policy, that they said I want Japan to get nuclear weapons. Give me a break” during a speech in Sacramento.  He doubled-down during his speech in San Diego Friday, insisting that Clinton “was saying that I want Japan to arm with nuclear weapons. I never said that.”

But fact-checking by CNN and Politifact prove that either Trump has had a memory lapse, or intentionally tried to mislead the public about his past statements on arming Japan to develop nuclear weapons, an action barred under since World War II.

Following news that North Korea has developed nuclear weapons, CNN’ s Anderson Cooper asked Trump on March 29 about his stance on the issue.  Trump replied, “At some point we have to say, you know what, we’re better off if Japan protects itself against this maniac in North Korea.”  Cooper pressed Trump on whether that includes nuclear weapons. He gave several affirmative replies including “it’s going to happen anyway” and “wouldn’t you rather in a certain sense have Japan have nuclear weapons?” CNN reported.

Trump earlier made clear he was leaving the nuclear option for Japan on the table during a New York Times interview, according to Politifact, which rated Trump’s statements on the issue “mostly false.”

Nuclear policy expert Daryl Kimball, executive director of the Arms Control Association, stated bluntly that as a result of Trump’s inflammatory statements, “Our allies in Japan and the rest of Asia are already alarmed by those statements.”

CNN repots that Japan’s Prime Minister Shinzon Abe voiced concerns as well, stating that “Whoever will become the next president of the United States, the Japan-U.S. alliance is the cornerstone of Japan’s diplomacy.”

Japan, the only nation ever to suffer the devastation of  nuclear bombs during the attacks on Hiroshima and Nagasaki during World War II, has had a pacifist constitution and a policy opposing use of nuclear weapons ever since.

Japan’s Foreign Minister Fumio Kishida state emphatically, “It is impossible that Japan will arm itself with nuclear weapons.”