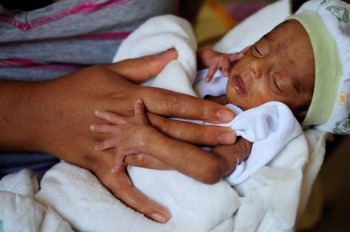 January 24, 2017 (Washington D.C.) – Federal funding for abortions has long been banned, including under the Obama administration. But now President Donald Trump has gone farther, signing an executive order to ban all funding for nonprofits that provide abortions overseas, even money that provide vital women’s health services such as birth control, mammograms, pre-natal and maternity care.

Trump’s action could result in 6.5 million unintended pregnancies, 21,700 mothers dying, 2.1 million unsafe abortions, and countless deaths of newborn babies from preventable conditions, according to the U.S. Agency for International Development.

For women in Zika-infected areas, not having access to contraception could mean many babies born with microcephaly, severe brain damage and other serious birth defects.  In Africa, where AIDS is rampant, condoms save lives.  Lack of care during pregnancies can put unborn babies at risk.

One program funded by the federal government has resulted in a 55% drop in maternal deaths during childbirth in Zambia, to cite just one example.

California’s new Senator, Kamala Harris, tweeted an image of the all-male political leaders on hand for the signing with her message stating, “This group just made it more difficult for women to get access to health care worldwide. You tell me what’s wrong with this picture.” 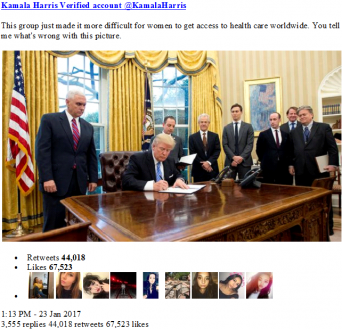 President Trump is continuing Ronald Reagan's legacy by taking immediate action on day one to stop the promotion of abortion through our tax dollars overseas,” insists Marjorie Dannenfelser, president of the anti-abortion advocacy group Susan B. Anthony List.

But cutting off money for non-abortion services such as pre-natal and maternity care will in fact result in the deaths of many babies born with preventable, life-threatening birth defects or other serious conditions.  Eliminating funds for cancer screenings and care for women during pregnancy and childbirth also puts the lives of women around the world at risk, making it hard to justify the “pro-life” description of Trump’s executive action.

women need not apply for independence. . . . "We hold these truths to be self-evident, that all men are created equal, that they are endowed by their Creator with certain unalienable Rights, that among these are Life, Liberty and the pursuit of Happiness." . . . It's also in the bible. . . "Unto the woman he said, I will greatly multiply thy sorrow and thy conception; in sorrow thou shalt bring forth children; and thy desire shall be to thy husband, and he shall rule over thee."