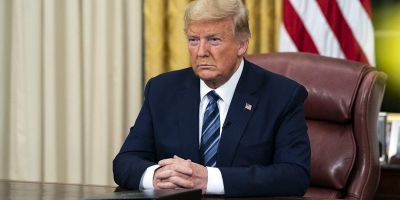 “I fully support H.R. 6201: Families First CoronaVirus Response Act,” Trump tweeted, adding that the measure should be voted on tonight…I encourage all Republicans and Democrats to come together and VOTE YES!”

The action comes after sharp criticism of the president and his administration from top health officials and his presidential campaign rivals, Joe Biden and Bernie Sanders, for the administration’s slow response in recent months and failure to distribute adequate numbers of tests to impacted states.

Trump’s emergency declaration frees up some $40 to $50 billion in Federal Emergency Management Aid to help states deal with the coronavirus crisis. It also allows Health and Human Services Secretary Alex Azar to waive laws in order to allow telehealth services, allowing for remote doctor visits and hospital check-ins. Limits on the numbers of beds and length of stays in hospitals can also be waived, along with rules on what areas of hospitals can be used to treat patients as the number of cases mounts. Doctors from other states could also be allowed to provide services.

In addition, Trump announced plans to set up drive-through testing of motorists in their vehicles, such as outside pharmacies, an action being tested currently in New Rochelle, New York.

Trump also said he hopes to provide aid to the hard-hit cruise line industry, with some cruise lines shutting down cruises for 30 to 60 days. In addition, he indicates he will order a temporary halt to interest payments on student loans, though not on loan principle.

Life News, an anti-abortion site, not a media outlet, reported that. Pelosi has said the opposite was the case -- that Trump's administration tried to insert anti-abortion language into the bill. We don't have access to negotiations between the White House and the House to know what's accurate, but since Trump said he'd sign the version the House passed it is likely that it does not include any abortion funding.