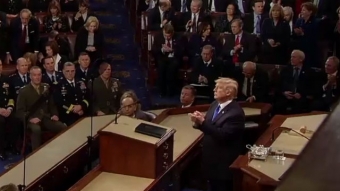 January 30, 2018 (Washington, D.C.) - President Trump doubled down on his offer of a path to citizenship for California’s estimated 500,000 eligible “Dreamers” Tuesday night in his first State of the Union speech.

The plan, which has drawn criticism from both Democrats and Republicans, would include a 12-year path to citizenship for 1.8 million immigrants brought to America as children in return for “a great wall on the southern border” and an end to both the visa lottery and chain migration.

“It’s time to reform these outdated immigration rules and finally bring our immigation sytem into the 21st century,” he said. “This Congress can be the one that finally makes it happen.”

He called it a “fair compromise — one where nobody gets everything they want, but where our country gets the critical reforms it needs and must have.”

Many Democrats don’t think the proposal goes far enough, and some right-wing Republicans would prefer to deport all the Dreamers.

On other issues key to California, Trump had few specifics. He didn’t mention the endangered North American Free Trade Agreement by name, but vowed to “fix bad trade deal and negotiate new ones.”

During much of the speech, Trump extolled when he considers the success of his first year in office: tax cuts, a rising stock market, the end of the health insurance mandate — the “core of Obamacare” — eliminating regulations and speeding up drug approvals.

“This in fact is our new American moment,” he said. “There has never been a better time to live the American Dream.”

Trump singled out one Californian in his speech: Preston Sharp, a 12-year-old from Redding, who started a movement that has now placed 40,000 flags at veterans’ graves of our great heroes.

“Preston, a job well done,” Trump said. “Young patriots like Preston teach all of us about our civic duty as Americans.”

I'm watching and waiting for the trickle down effects on the poor like myself. They're coming, and things could get rough for many. Wait for it... :-(