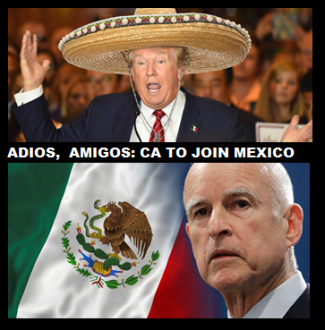 The wall separating San Diego from Mexico will be torn down. The new wall will begin in Yuma at the California-Arizona border and extend north to Oregon, then west to the Pacific.

“It’s going to be a big wall, the biggest,” Trump said, wearing a sombrero in a joint press conference with Mexico's president. “This is a great deal.  It will save taxpayers billions! No more California lawsuits over my administration’s policies on immigration, climate change, offshore oil drilling, or whatever else.”

Mexican President Peño Nieta extended a warm welcome or “Bienvenido” to Californians. “There is precedent for this deal,” he said. “California joined Mexico after the 1821 War of Independence and was ceded by Mexico to the United States in 1848, after the Mexican-American War. So this pact, it takes California back to its pre-statehood status, as part of Mexico once again.”

President Trump promised that Republican voters in California will be offered a one-time amnesty if they wish to leave the state before the wall is built and emigrate to the U.S.

President Peño Nieta countered by offering to accept “Dreamers” from across the U.S. wishing to come to the new Mexican state of California.

Not everyone favors turning California over to Mexico.

Congressman Duncan Hunter, a staunch defense advocate and NAFTA opponent, voiced concerns over losing military bases in San Diego. Trump responded that he will relocate all of California’s Naval and Marine Corps bases to red states including Texas, Alabama and Florida. Since Hunter will lose his seat in Congress without a state to represent, President Trump announced he will appoint Hunter an ambassador, heading up a new U.S. embassy in California.

Former House Speaker Nancy Pelosi (D-California) questioned the President’s authority to forge the landmark deal without consent of Congress. But Republican leaders in the House and Senate assured that they have the votes to pass the “Dump California Act.”

Some Trump voters in California greeted the news with anger, tossing their Make America hats in the air and shooting them full of holes. But others welcomed news of the amnesty program and said they looked forward to moving to red states with like-minded conservative voters.

Governor Jerry Brown, customarily at odds with the Trump administration, praised the move.  “I look forward to being Governor of the new Mexican state of California,” said Brown.  After that six-year term is up under Mexico’s term limits, Brown noted that he will have fulfilled residency requirements to run for President of Mexico, which also has a six-year term limit. This drew chants from his supporters who shouted, “Twelve more years!”

Antonio Villagairosa, Brown’s rival for the governorship, has promised that if voters elect him, he’ll assure “a taco truck on every corner,” California oranges in every kitchen, and conversion of the ICE detention facility in Otay Mesa to a new university and multi-cultural conference center.

Brown observed, “California has the sixth largest economy in the world. We look forward to bringing our economic engine to help power the combined economy of Mexico and California.” He issued his first executive proclamation, declaring a new state drink: the Margarita.

Free of the obligation to pay federal income taxes, Californians will have more disposable income, says economist Filmore Cash. “In Mexico, the income tax ranges from less than 2% to 35%,” he told ECM. “The infusion of California dollars into the Mexican economy will bolster programs ranging from the nation’s universal healthcare system which includes free care for the poor, to combatting crime including drug cartels.”

Brown, once known derisively by his enemies as “Governor Moonbeam,” proposed going farther and renaming the combined entity “Mexifornia.”

The Governor also proposed a redesigned flag that would ditch both the extinct California grizzly bear and the Mexican eagle, instead adopting a rocket ship image.

The rocket reflects a proposed partnership with Elon Musk’s SpaceX for a Mexifornia space program that would be the first to land a man on Mars 12 years from now, in 2030.

Musk said of the joint venture, as a mariachi band played in the background, “I look forward to being on that flagship journey, along with Jerry `Moonbeam’ Brown. Let’s make the universe great. Arriba!”