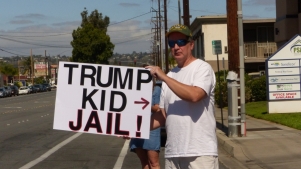 The announcement follows news footage this week of children kept in cage-like enclosures, denouncement of the separation policy by Democrats and even prominent Republicans including former First Lady Laura Bush.

It also comes on the heels of a report on MSNBC this week revealing that the administration has opened several “tender age” facilities housing only babies and toddlers, with staff prohibited from picking up or comforting distraught youngsters.

The new policy aims to bypass a consent decree that bars the federal government from keeping children in immigration detention for longer than 20 days.

House Democrats have asked how Homeland Security and Health and Human Services plan to actually make that happen.

Davis, a Democrat, states, “Since thousands of children are still detained and separated from their families, the Administration owes it to the American people to tell us exactly how and when they plan to reunite them.”

Some advocates for children say that putting children in detention with their parents is the wrong solution, noting that prior administrations allowed parents to remain free until their immigration hearings. No other country incarcerates undocumented immigrants. Most immigrants are allowed to remain free pending hearings, with ankle bracelets in cases considered high risk of flight.

Crossing a border without authorization is a misdemeanor; the U.S. does not routinely jail people accused of other misdemeanors pending trial.

Jennifer Quigley at Human Rights First says, "By trying to indefinitely detain traumatized children and their parents seeking protection in the United States, the Trump administration is doubling down on their cruelty.  There is no scenario in which children should be held in prison like criminals."

She adds, “There already exists a solution to family separation. The Trump Administration ended an effective case management program that provides alternatives to detention and ensures that asylum seekers show up in court.”

From my perspective as long as we fight each other we play right into the hands of those that control both Parties. We all saw the Republicans just give most of the Deficit financed tax cuts to those that are already secure just like we saw from the Democrats in 2008 and on. Wall St elite get off with little more than a hand slap and there were all but no prosecutions for these crimes towards all of us. Just because it’s unpopular to point it out because it’s beyond our control doesn’t mean it shouldn’t be said. The poor and middle-class are getting screwed over in a very harsh and unfair way while those that are doing it take their turns every election cycle giving us a sound thumping while we dance to the same old tune of consolidated power. We won’t change that until we join together just like they do.

genecarp has it right, Trump has a long history of deceit and constantly changing his mind about whatever. His speeches are often a mix of hard to follow words which can be confusing. Diplomacy? Not so much. To the haters of East County Magazine: I suggest listening to Miriam, be civil and stop attacking others opinions. Play nice or get banned, it's quite simple really. Of course some are here just to create drama. To those I say; "go to craigslist rants and raves" and get busy with other like minded agitators". Actually, why the heck are you even posting here if it's so bad? Get a life!
"his lack of character and judgement have already been well established" - So has yours. I've witnessed you get your fanny paddled on here while attempting to debate, which typically results in your advisory being called a troll, or getting banned, or both.

Those who were banned, and there aren't many, engaged in repeated or severe violations of our site rules. They were not banned for voicing an opinion, however popular or unpopular their view may be.

Our rules require civil dialogue. We are cracking down on people who repeatedly insult and belittle others,  use racist langauge or profanities, incite violence, or post false and libelous statements.

Today we banned a person who suggested that immigrant children should be killed and eaten. Advocating murder of children warranted a rare ban without a warning first.

A second person today was warned not to bully another poster who is autistic. His post including a gory and gross remark as well as totally false assumptions about her beliefs and values.  When I asked him politely not to pick on this young girl going through challenging times, and pointed out the errors in his assumptions about her, he exploded with a diatribe and stated he wouldn't frequent our site again, which is good; such hateful treatment of others is not welcome here.

Others who ignored repeated reminders of the site rules eventually lost their posting privileges.  Over the years, fewer than a dozen people have ever been banned for anything other than spam (ie those bots that post links selling stuff, another site rule violation).

While it's one thing to make a statement about an elected official's character or lack thereof,  it is not appropriate to accuse a poster on our site, a private figure, of having a "lack of character."  That's negative and potentially defamatory. Please revise your post and limit it to voicing your views on the issues at hand, without atatcking other posters who hold a different view.

I didn't realize there would be one rule for him and a completely different one for me. My comment in question was in fact negative, I intended it to be, purposefully. My comment was a rebuttal to genecarp's reply of "If one were to look beyond one’s nose" Here's a definition of that statement, please explain to myself and others how the two are any different.....I'll wait. When you're done, in the interest of being impartial and unbiased, I'll expect a public scolding and reprimand of Gene and his comment to follow. Many Thanks

Suggesting  one look "beyond one's nose" to see broader insights and maybe learn more about an issue is not the same as saying someone lacks character, meaning they are unethical.

I left alone some of your negative comments even though you stereotyped the "left" with views that some on the left share, but others don't.

The character comment was targeting a specific individual here, however, in a highly negative way, as opposed to someone just suggesting someone do more research, or look around more broadly.

I have at times emailed Gene and others on the left  or center here, or corrected them on the forum, if I felt they went overboard and violated a rule or were overly brusque.

Hoping everyone, Gene included, can err on the side of using polite language when attempted to educate or persuade others, or simply share an opposing view.  We can all disagree without attacking each other.

Now your trying to sell me a lemon and convince me its a rose. A negative and a negative do not a positive and a negative make ma'am. Gene's comment was derogatory and your unwillingness to admit and address that openly only serves to prove my point.
Hypocrisy exposed! This man/woman totes a quiver of truth arrows! - Well done.
Can’t win. This is about the left believing the crime of entering the country illegally shouldn’t be prosecuted. They want them released into the U.S. indefinitely, which only drives us to another crisis. Obstruct, Obstruct, Obstruct.

If one were to look beyond one’s nose, one would see that it’s not just those described as “the left” that are also taking exception to this latest iteration of MAGA and who we are as Americans. Doing so shifts the “Selected Outrage” onto you my friend. It was good to see Trump do the right thing on this but I think many of us are holding our breathes as his lack of character and judgement have already been well established. Not to mention his well documented and constant pathological lying.