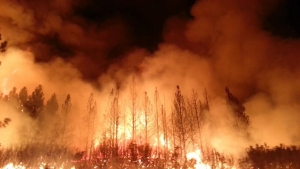 November 11, 2018 (San Diego) - With a quarter-million Californians evacuated from their homes and wildfires so far claiming nine lives, President Donal Trump today took to Twitter and inflamed tensions—blaming California for causing the fires by mismanaging its forests and threatening to cut off federal funds.

Although he approved the state’s request for a state-of-emergency declaration—freeing up funds to help the massive firefighting effort and recovery—the president couldn’t miss the opportunity to aim a derisive shot at the nation’s largest “Resistance State.”

But Trump’s shot was a bit off the mark: The deadly Camp Fire is burning in parts of the Plumas National Forest. To the extent that there is mismanagement, as Trump suggests, it could be said to be the responsibility of the federal government, which oversees the lion’s share of the timberland covering the state. California owns and manages only about 2 percent of the forested acres in its boundaries.

And the Southern California blazes, the  Woolsey and Hill fires, are raging in canyons and suburban subdivisions west of Los Angeles. The fires are racing toward beaches in Malibu, nowhere near a forest, federal or otherwise.

The president’s response unleashed a flood of retorts from critics including Katy Perry, John Legend, members of Congress and everyday Californians, many of whom noted that California faces persistent drought and increasing wildfires as a consequence of climate change, which the Trump administration has largely dismissed. 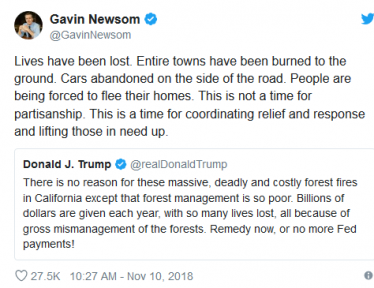 While criticism abounds regarding appropriate forest thinning, controlled burns and other fire-management approaches, there are no simple solutions to the complicated management of forests.

A state commission recently reported on what it described as the neglect of the state’s forests, but apportioned blame to a broad swath of agencies.

“The president’s assertion that California’s forest management policies are to blame for catastrophic wildfire is dangerously wrong,” Brian Rice, head of the 30,000-member California Professional Firefighters said in a statement. He added “nearly 60 percent of California forests are under federal management, and another two-thirds under private control. It is the federal government that has chosen to divert resources away from forest management, not California.

“Natural disasters are not “red” or “blue”—they destroy regardless of party. Right now, families are in mourning, thousands have lost homes, and a quarter-million Americans have been forced to flee. At this desperate time, we would encourage the president to offer support in word and deed, instead of recrimination and blame.”

President Trump has made comments about withholding federal funding from California whenever state events aroused his irritation, including when protests on the UC Berkeley campus kept right-wing speakers from being heard and when California moved to become a “sanctuary state” for undocumented immigrants. But he never followed through on those threats.

And California officials are fond of pointing out that California send more money to the federal government in taxes than it received back from Washington in federal funds.

For a deeper look at the issues at stake, explore our wildfire tracker.

Trump seriously needs to exert some control on what he says, tweets, etc. He seems to care very little about reactions, or how words can undermine trust when he unleashes nasty remarks about people, states, even other countries. Trump has also shown near zero diplomacy so far during his reign. If he doesn't get his way, then whoever is in his sights gets publicly attacked verbally, then the dreaded words come "You're Fired"! I'm actually surprised some foreign country hasn't attacked the U.S. - again. There have been threats though... Oddly enough, there seems to be many still loyal to him and his cause (whatever that may be) and I find this perplexing considering if this was anyone else, they would probably have been thrown under the bus long ago. Go figure.